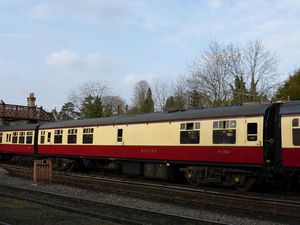 BRBritish Rail or British Railways Mk 1 Restaurant Miniature Buffet (RMB) 1853 was built at Wolverton in 1961 to diagram number 99 of lot number 30670. The Miniature Buffet coach was designed to provide quick snacks, being staffed by only one attendant in service. The coach seats 44 passengers at tables, and also has bench seats opposite the serving area.

1853 arrived on the SVRSevern Valley Railway in 1989 from Bounds Green Carriage Depot (London) via Holyhead, having been purchased by SVR(H)[1]. It is used in Set C, the BRBritish Rail or British Railways Crimson & Cream running set.