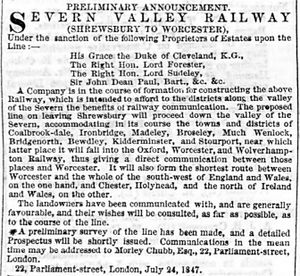 Newspaper article of 1847
The Shropshire Union Railways and Canal Company was an English company formed in 1846, which managed several canals and railways.

Proposals for a Severn Valley Railway

A committee of the Ellesmere and Chester Canal Company met with the railway engineer Robert Stephenson on 24 July 1845. From that meeting, four new railways were proposed, one of which would follow the course of the River Severn from Shrewsbury to Worcester, with a branch from Ironbridge to Donnington and Wellington.[1] An advertisement appeared in the London Gazette of that year:

Robert Stephenson, assisted by Frederick Swanwick, produced a plan and section during 1846. The proposed route closely followed that of the Severn Valley Railway as eventually built, passing Berrington, Cound, Cressage, Buildwas Abbey and into the Ironbridge Gorge. Tunnels were proposed under parts of the Apley Estate to meet the requirements of owner Thomas Whitmore that the line not disturb his view. A short tunnel was also proposed south of Arley before the river was crossed. From there the route continued via Bewdley (Wribbenhall) and a tunnel at Mount Pleasant with the line closely following the River Severn and terminating at Lowesmoor Canal Basin in Worcester, a total length of some 48 miles. A short branch in Worcester would connect to the OWWOxford Worcester and Wolverhampton Railway line north of Shrub Hill station. Three other branches were proposed; from Benthall to Coalbrookdale and a connection to the proposed Shrewsbury & Birmingham Railway Coalbrookdale branch, from Broseley via Madeley and Stirchley to another junction with the Coabrookdale branch, and from Stourport to Kidderminster.[3]

During 1846 the Ellesmere and Chester Canal Company obtained an Act of Parliament to reform itself as the Shropshire Union Railways and Canal Company ("SURCC") and sought acts to proceed with three of the four proposed railways including that in the Severn Valley.[1] The Bill of Parliament for the proposed line was drawn up and advertised in the local press in November of that year before being deposited on 30 November 1846.[3]

An article announcing the proposed formation of a company to build the railway appeared in the Sun (London) on Saturday 24 July 1847. However on 31 July 1848 the same paper reported "'SEVERN VALLEY RAILWAY - We find that this project, although delayed, is not abandoned, the promoters having now put themselves in a position to proceed with it as soon as the proper time shall arrive."[4]

Ultimately only the Shrewsbury - Wellington - Stafford section of the SURCC's proposed railways passed through the House of Lords successfully.[5] The SURCC had many other projects in hand at that time, and in the event did not proceed with the Severn Valley proposal. However the plans were not allowed to die and in 1949 Robert Nicholson, a close associate of Stephenson, was employed to carry out another survey. This formed the basis of the Severn Valley Railway as eventually built.[6]

In October 1852 an article in the Worcestershire Chronicle and Provincial Railway Gazette expressed hope that the 'new' Severn Valley Railway "...stands on a more secure foundation than the last of that name, projected in 1847, the bills for advertising which are we believe unpaid to this day and likely to remain so"[3].