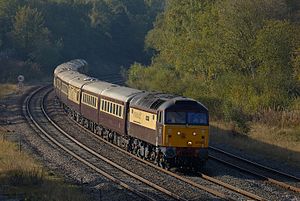 The Northern Belle is a private luxury train launched in 2000 which operates mainly in northern Britain with departures from Birmingham, Liverpool and Manchester. It reflects the style of 1930s rail travel on England's 'Belle' trains and Pullman carriages.[1]

Northern Belle Limited was owned by Venice Simplon-Orient-Express and operated the train under under the title 'Belmond Northern Belle' as a sister to the 'Belmond British Pullman', which operates mainly around London.

Contract with the SVRSevern Valley Railway

A small compound at the North end of the Kidderminster car park provided space for Belmond Northern Belle containers and office accommodation for their staff. Some on-train staff were recruited locally.

To mark the tenth anniversary of the 2007 Storm Damage the SVRSevern Valley Railway organised on 19 June 2017 a special service on the line for its members and supporters. This utilised the Belle, hauled by SR 34027 Taw Valley and a Class 57 diesel locomotive.[3]

On 2 November 2017 the Venice Simplon-Orient-Express sold The Northern Belle Limited for an undisclosed sum to Northern Belle (Holdings) Limited, a new company being a 50-50 joint venture between tour promotor David Pitts, owner of Wakefield-based marketing agency D P Publicity, and David Smith, owner of West Coast Railways.[4] The new owners invoked the early termination clause in the contract from June 2018. The stock was rebased at Carnforth by 9 March 2018, by which time the compound was cleared and only two spare vehicles remained on the SVRSevern Valley Railway,[5] although occasional stabling continued after that date. The spare vehicles were collected by two West Coast Railways locomotives and moved to Carnforth in May 2018[6]. The 2018 Report and Accounts recoded £57,000 of stabling cost revenue to the SVRSevern Valley Railway in addition to the budgetted annual amount, by virtue of the termination.

The Belmond rolling stock comprises 11 operational carriages and two spare vehicles. The carriages are painted in ‘Northern Belle’ livery and have been re-engineered in the style of 'Pullman' coaches. The interiors feature artwork, mosaics and wooden marquetry panels. They comprise: