Heritage buses and other vehicles

The SVRSevern Valley Railway in preservation has been home to or associated with a number of heritage buses and other road vehicles. 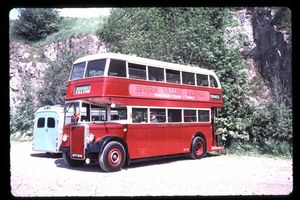 KPT 909 is a double deck Leyland Titan PD2 model, chassis No. 494078, seating 26 downstairs and 27 upstairs. The upstairs seating uses long seats with a side sunken gangway, allowing the bodywork to be one foot lower than the conventional type to cater for low bridges.

The vehicle was first registered on 31 August 1949 by its original owner, the late Mr. Oliver Gibson, of "Weardale Motor Services", Frosterley, County Durham, where it was used until 1969. It was then stored before being acquired by Dr. Michael Taylor and driven down from County Durham to Bewdley by Don Wilcox on 19 August 1970. The vehicle was sufficiently roadworthy to pass its MOT and convey a party of SVRSevern Valley Railway members to Didcot for the GWSGreat Western Society open day on 19 September 1970.[1]

It was later repainted in original livery and advertising panels produced advertising the SVRSevern Valley Railway services in 1971. It made a number of trips to other heritage railways and elsewhere.[2] This included a trip to the Crich Museum in 1977.[3]

The vehicle is now preserved as part of the Science Museum Group collection[4]. 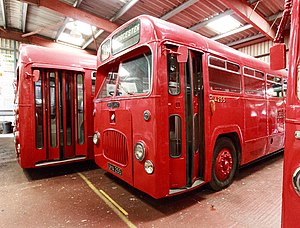 The vehicle was acquired by Bob Sim in 1971, the bus company agreeing to the sale on the understanding that the bus would not be used for "private hire or gain" and would be well preserved in its original colour. While at the SVRSevern Valley Railway, the vehicle was based at Bewdley where it was used for railway maintenance work and from time to time as a general transport vehicle for company workers.[2] It was also used in conjunction with KPT 909 to bring private parties from BRBritish Rail or British Railways railheads to Bridgnorth for trips on the SVRSevern Valley Railway.[5]

UHA 255 is now at the Transport Museum, Wythall, ownership having passed to the Museum's predecessor society in early 1977[6]. 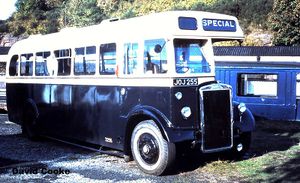 JOJ 255 is a Leyland PS2/1 single deck bus, chassis no. 495585, body no. M4634, ex-Birmingham Corporation Transport no 2255. Birmingham City Transport bought 30 Leyland PS2/1 Tiger single deckers in 1950 with 'O.600' 9.8 litre engine and synchromesh gearbox. They were fitted with Weymann 34-seat front-entrance bus bodies and several distinctive features, including a route number indicator box half-way down the nearside roof. It was allocated when new to Selly Oak garage as no. 2255, and withdrawn from there in May 1969, yet transferred to West Midlands PTE when it absorbed Birmingham City Transport on 1 October 1969.[7][8] 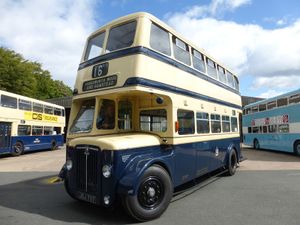 JOJ 707 is a Metro-Cammell bodied double decker, with Daimler engine, built at Elmdon in 1952 and ex-Birmingham Corporation Transport no 2707. The 56-seat vehicle spent most of its life at Liverpool Street garage. It arrived on the SVRSevern Valley Railway in 1971 under the custodianship of the late Maurice Newman.[9] After several other owners it became part of the Wythall Transport Museum collection in 2017[10]. 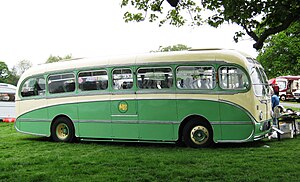 1294 RE, a similar Harper Bros. Guy Arab with Burlingham Seagull body (Wikimedia Commons)
1293 RE is a Guy Arab coach with Burlingham Seagull body, ex-Harper Bros. (Heath Hayes) number 59. After Harper Bros. were taken over by the National Bus Company, the coach was sold to the Wolverhampton Branch of the SVRA in 1975 for £150. It was used for three years, mainly on local outings, and was also taken to the National Tramway Museum at Crich and to shows at Bromyard and Bishop's Castle.[11]

In 1978 the coach was placed on loan to the Leyland Commercial Vehicle Museum. It 1994 it was then moved to Inskip for undercover storage and restoration.[11] It is now owned by Bernard Rogers[8]. 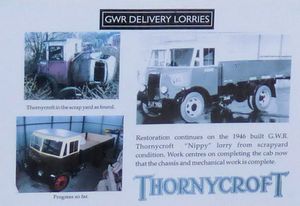 A Thornycroft 'Nippy' lorry and a collection of spares were originally purchased by Paul Fathers, Mick Osborne and Mick Yarker from a scrapyard in Shrewsbury on the late 1970s, with a tree growing through the cab by way of a bonus. It came into the possession of the Friends of Kidderminster Town Station in 2003.[12] The information poster shown was displayed by the Friends in 2014, at which time it was still in the course of restoration.

The Friends of Kidderminster Town Station in 2019 referred to this vehicle as a future project, the chassis and parts of which were in storage shed to dry out and enable them to examine in detail the amount of repair required[12].

In the early 1930s the LNERLondon & North Eastern Railway approached Napier & Son, the car and aero-engine manufacturers, with a request for a solution which would do away with the use of horses for local haulage purposes while retaining the manoeuvrability of the horse and wagon and the flexibility of changing the wagons.[13] The resulting three-wheeled tractor unit, known as a Mechanical Horse, had a single front wheel giving excellent manoeuvrability in tight spaces. It was used with a detachable open trailer meaning that, unlike a lorry, the tractor unit did not need to stand idle while the trailer was loaded and unloaded. The GWRGreat Western Railway operated two types of these articulated vehicles in the 1930s, the Scammell Mechanical Horse and the Karrier Cob. They both had the same couplings and were available in 3-ton and 6-ton variants.[14] They were a common sight at main line stations such as Kidderminster where they were used to move goods around the station yard and to make deliveries to local customers.[12] A 3-ton Scammell Mechanical Horse (type M.H.3.) was the first Mechanical Horse on the SVRSevern Valley Railway in preservation, arriving in 1970 having been acquired by Bob Timmins and Phil James. Several trailers of different types were purchased to fit the M.H.3 which saw regular use around the site at Bewdley.[14] The M.H.3. variant was powered by Scammell's own side-valve 1125cc petrol engine. 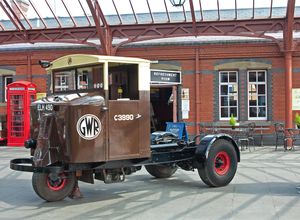 Scammell ELH 490 at Kidderminster. Photo: SVRSevern Valley Railway
In 1971 a derelict Mechanical Horse was purchased from Star Containers in Smethwick for the sum of £10 and moved to Bewdley to provide spares for the M.H.3. However on arrival it was discovered that this vehicle was the 6-ton (M.H.6) variety which had almost no interchangeable parts with the M.H.3. It lay derelict at Bewdley for a year before owners Mick Yarker and Paul Fathers decided to restore in its own right. The restoration was completed by 1974, with a picture of BNX 833 and the owners appearing in SVRSevern Valley Railway News. It carried the fleet number C6314. Once restored it was used regularly around the site for clearing up and moving spares, even shunting two coaches at a time.[14] A picture of BNX 833 can be seen on flickr (External link).

Mechanical Horse ALN 367 briefly appeared in the TV Series The Inspector Alleyn Mysteries filmed at Kidderminster and first broadcast in 1993. The Internet Movie Cars Database states this is a 1947 6-ton variant.[17] Circa 2011, ALN 367 was pictured on the FoKTS projects page with a short note "Some basic work has now started on buying in the hardwood required for the rebuild"[18]. It therefore appears that BNX 833, ALN 367 and ELH 490 are the same Mechanical Horse at different times.

In the late 1940s the Scammell Mechanical Horse was superseded by an upgraded model, the Scammell Scarab. A larger 2090cc side-valve petrol engine was used for both the 3 and 6-ton models. Scammell also introduced diesel engines to the range, using the Perkins 4-199 for 3-ton and 4-203 for 6-ton models.[19]

Circa 1974 a number of members of Highley station staff purchased a 1953 6-ton Scarab from the Halesowen Steel Company. They also acquired two conventional trailers and one logging trailer, in spite of the efforts of their "Bewdley Rivals". At the time it was intended to restore the Scarab into BRBritish Rail or British Railways 'Blood and Custard' livery.[20] It was also in green livery at one time[8].

The Lister Auto-Truck was a small monowheel tractor built for moving light loads around factories, railway yards and similar sites. They were built by R A Lister and Company of Dursley, Gloucestershire, well known for their range of small stationary engines.

Ex-Great Western Railway Lister Auto-Truck HWO 51 (743 UXF) was purchased new by the GWRGreat Western Railway in about 1938 for use at Newport Station, and is a type SS3 fitted with a single cylinder 600cc JAP petrol engine. It was subsequently sold to a Caduggan’s flour mill at Usk who registered the Auto-Truck (reg. HWO 51) in 1949 to allow it to cross a public road. In 2003 it turned up in the hands of a farmer at Usk in a derelict state and was bought for restoration and re-registered as 743 UXF. It was then sold, unrestored, to Alex Thorpe who restored the truck. It was purchased by The Friends of Kidderminster Town Station in about 2007.[12]

An SVRSevern Valley Railway member is also restoring an Auto-Truck at Bridgnorth.

On the Buses events

In 2009 the SVRSevern Valley Railway ran a trial event to see if there was there was an appetite for a 'busfest' type event. From 2010 the SVRSevern Valley Railway has held annual 'On the Buses' events from Bewdley and Kidderminster. Typically it features visiting heritage or celebrity buses on display or offering rides between stations or around the local area, together with sales and information stands selling a range of bus related items and memorabilia.

The SVRSevern Valley Railway's first Kidderminster-based heritage bus-themed gala event, the "Kidderminster Historic Road/Rail Rally" was held on 12 October 1985. It was organised by The Erlestoke Manor Fund in aid of the restoration of 7802 Bradley Manor and featured over 70 vehicles including vintage cars and other commercial vehicles as well as buses. A vintage bus service operated at half-hourly intervals between Kidderminster and Bewdley using a 1940 Trent single deck bus and a 1950 Bedford Duple coach.[23]

In 1991 the event was organised jointly by the SVRSevern Valley Railway and the Worcester Bus Preservation Society. The second such event, the 1992 'Vintage Vehicle Rally' on 11 October at Kidderminster, was attended by more than 100 classic vehicles including some seventy buses, thirty cars and a dozen commercial vehicles. Eight single decker and four double decker buses provided a shuttle between Kidderminster and Bewdley.[25]

The joint SVRSevern Valley Railway / Worcester Bus Preservation Society events continued in the same format until the twelfth and final 'Classic Vehicle Day' which was held on 14 October 2001. It included "...the usual 'Bewdley Shuttle' and Green Street 'Park & Ride' services".[26] The latter service allowed the SVRSevern Valley Railway public to park in a hired car park in the town and catch a classic bus to the Railway, while the classic vehicle event took place on the station car park. In early 2002 the agreement to use the town car park was withdrawn and the October 2002 event was reduced in scope, becoming a "Classic Car & Bike Day" with no buses.[27] Shortly before that time, a passenger was injured after falling from the platform of a bus as it was pulling away, caused by them doing something unexpected and that they should not have been doing or even considering. This uncovered an issue about the responsibility of insurance cover for the buses and other vehicles attending the festival, which contributed to its demise[28].