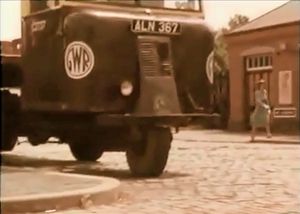 The railway scenes filmed on the SVRSevern Valley Railway featured 7819 Hinton Manor and a number of the GWRGreat Western Railway carriages.

For 'Death at the Bar' a closing scene was filmed outside Kidderminster station entrance and on the station concourse, which at the time did not have the canopy. The closing scene begins with a brief shot of a Scammell Mechanical Horse.

Although the novel was set in 1939, Hinton Manor's BRBritish Rail or British Railways smokebox number and 'cycling lion' logo are visible.