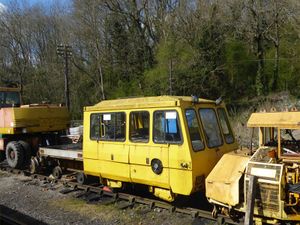 DX68811 is a Permaquip Personnel Carrier Mk II, also described as a "Patrolmens' vehicle". It is powered by a VW 6-cylinder turbocharged water cooled diesel engine and may be thought of as a more modern version of the Wickham Trolley. It has also carried the fleet number ETI41.

The BRBritish Rail or British Railways DepartmentalRolling stock used for the railway’s own functions (engineering etc.) rather than for general passenger or goods traffic. DX 688XX number range was allocated to Permaquip Personnel Carriers. The first five, DX68800 to DX68804 were ordered in 1985 for use on the former Cambrian lines where they were to replace the last London Midland Region Wickham Trolleys.[1] A further six were built in 1986 and numbered DX68805 to DX68810.[2] DX68811, which was delivered in 1987, was the only Mk II and was also the last Personnel Carrier built by Permaquip for British Rail[3].

DX68811 was a 'one-off' modified design with less seating and a higher top speed of 50mph. It was intended for use in the Scottish Highlands, mainly on the Far North lines from Inverness into Sutherland and Caithness, where long stretches of the routes to Kyle, Wick and Thurso had limited road access.[4]

DX68811 was purchased from contractors Morgan Sindall in June 2015 by the Rail Trolley Trust and delivered to the Whitrope Heritage Centre at Hawick, Roxburghshire in the same month.[3] It was still resident there in 2019.[2]

As of April 2022[update] DX68811 was in the siding at Highley as shown below. Also visible behind it are BP065 Permaquip Ballast Packer and Parry People Mover PPM 50 prototype 'Car 12'.

Editorial note: Confirmation is sought on whether DX68811 is on hire or now permanently resident on the SVRSevern Valley Railway.