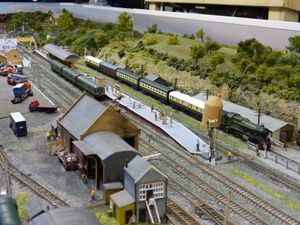 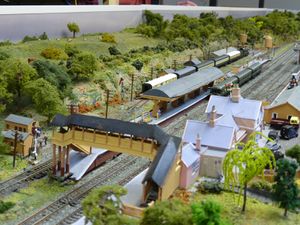 This extensive N gauge model of Bewdley was on display in The Engine House during the April 2016 'Open House' weekend, courtesy of the Telford Model Railway Group.[1]

An interesting feature of the model is the presence of a signal box in the Bewdley Down Yard, which can be seen nearest the camera in the first photograph. A Signal Box was constructed at Bewdley by McKenzie, Clunes & Co for the Tenbury & Bewdley Railway as part of the track doubling at Bewdley in 1864. Contemporary reports describe the box as being situated between the south end of the down platform and the entrance to the goods yard, 12ft by 10ft by 12ft in size, double lined with floors and glazed windows, and having a slate roof. It contained a 'Chambers Patent Junction Signal Apparatus' with seven signal levers and four point levers.[2]