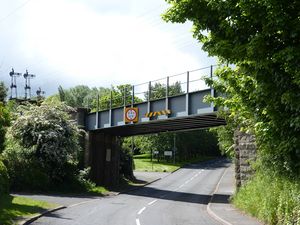 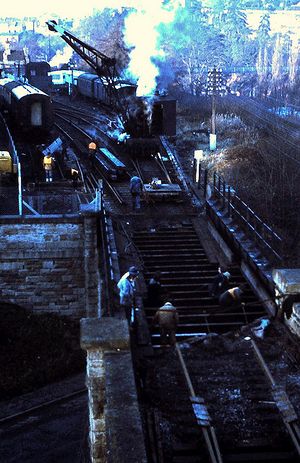 Overhaul of the bridge underway in 1973

Cleobury Road Bridge (Bridge 35) allows the main road from Bridgnorth towards Cleobury Mortimer and Highley to pass underneath the Severn Valley Railway. It is a plate-girder bridge with a span of 55ft on the skew and 35ft on the square, and is located immediately adjacent to Bridgnorth Station.[1] The points controlling access to platforms 1 and 2 are situated beyond the bridge, which is therefore crossed by locomotives while 'running round'. The viewing gallery at the foot of Pan Pudding Hill ends next to the bridge's northern abutment.

The bridge underwent an overhaul which began at the end of October 1973. Two weekends were spent dismantling the bridge down to the metal girders, which were then cleaned primed and painted. New timber baulks were drilled and test assembled next to the bridge. The assembled baulks were then dragged into place using diesel shunter No 17 "Highflyer". Refitting of the rails was hampered by the failure of the steam crane, with the rest of the rails needing to be hauled into place by hand. This was achieved in time for the scheduled Christmas services to run, with the job being completed in the New Year.[2]

A more significant refurbishment was carried out over the winter of 1978-79, during which the steel bridge span itself was replaced as part of the program to upgrade the whole line to take heavier trains. The work was carried out by a combination of the SVRSevern Valley Railway’s Permanent Way and Civil Engineering Departments. The old girders were lifted out and replaced by new girders, supplied by Rubery Owen & Co, using the 30 ton and 6 ton steam cranes positioned on each side of the bridge.[3]

In mid-1992 problems were noted with the bridge’s abutments and the SVRSevern Valley Railway’s consulting engineers recommended that they should be rebuilt.[4] Shortly before this could be carried out, the bridge also suffered a vehicle strike.[5] In January 1993 the girders were again lifted out so that the necessary repair work could be carried out to the abutments. Completion of the work overran by one day, with the SVRSevern Valley Railway running a ‘replacement bus service’ between Bridgnorth and Hampton Loade on Saturday 13 March, the first weekend of the 1993 season.

In early 2008, a few days before the section of the line between Bridgnorth and Hampton Loade was due to reopen after repairs following the 2007 storm damage, the southern end of the bridge was found to be out of alignment by about 10cm following an unreported strike by a lorry. An emergency road closure was authorised while the 30 ton steam crane successfully relocated the end of the bridge on its bearings, allowing the reopening to take place on Saturday 9 February as planned.[6]