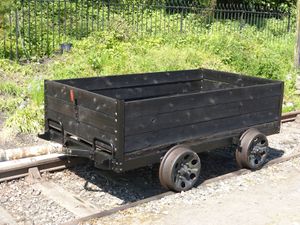 This Type 17A Wickham Trolley was works number 5019 of 1948, and was originally built for BRBritish Rail or British Railways’s London Midland Region, first seeing service at Watford.[1] It carries an identification plate PWM 3189.

Originally built as a 2w-2PMR with a J.A. Prestwich & Co (JAP) 1323cc engine,[1] it arrived from B.R.British Rail or British Railways's Northampton engineer's depot in November 1968 with Wickham Trolley LNER no 748.[2] It has since been dismantled and adapted for use as a trailer vehicle for LNERLondon & North Eastern Railway 748. The main picture shows the trolley at Highley in May 2017.