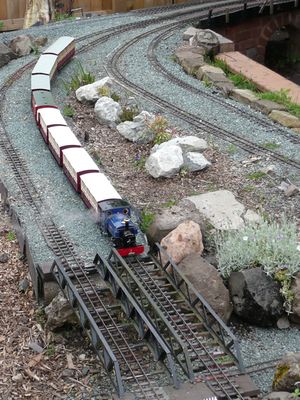 The decision to build a permanent garden railway in the paddock picnic area dates from 1985. Before then, John Campbell's 16mm live steam railway was a popular attraction at early Hampton Loade gala days, but it was a problem locating the railway without disrupting the normal operation of the station. The first train on the new railway was hauled by a model RustonRuston and Hornsby Ltd. of Lincoln, engineer and locomotive manufacturer acquired by English Electric in 1966. Also, Ruston-Bucyrus Ltd established in 1930 and jointly owned by Ruston and Hornsby and Bucyrus-Erie (US) diesel locomotive on 28 March 1985. Initially there was just a straight up and down line along the fence; later an oval line was constructed later in a single weekend[3].

It now comprises an extensive scenic outdoor layout with three separate running circuits and facilities for both gas and coal fired locomotives.

The Coalyard Miniature Railway at Kidderminster