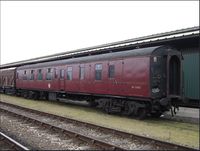 From 30 March 2012 it formed part of the Riviera Trains mainline coaching stock.[5]. By 2014 it had moved to Crewe. Now part of the Locomotive Services Limited fleet, it carries the number W35467 and is stored[6].

Carriages formerly resident on the SVR