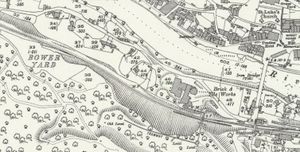 Bowers Yard Lime Kilns were located approximately ¼ mile upriver from Ironbridge and Broseley station, between that station and Buildwas. The kilns processed limestone into lime, rock having been quarried from the steep sided Ironbridge gorge at Benthall Edge. The quarries were busy in the 18th and 19th century, providing flux for use in the iron industry around Ironbridge and Coalbrookdale,[1] but fell into disuse during the 1870s,[2]. These original kilns may have been served by the railway[3] although OS maps show no evidence of a siding at this date.

The kilns were brought back into use during the 1920s,[1] with "1928" being inscribed in one of the kilns,[4] a rail siding being built at this time. Limestone from the quarries near the top of Benthall Edge was brought down to a terminal near the siding by a self-acting incline plane, from where it was moved to the kilns for burning. For some years, the GWRGreat Western Railway brought coal to the kilns and transported the lime to various areas of the country; they also used large quantities for cement in their own civil engineering operations.[5].

The siding was still in existence in 1934,[6] and it is not clear when the lime kilns and siding closed, although it is suggested that it could be as late as the 1960s.[7] Bower Yard can be seen in the OS Map of 1903 above, which pre-dates the 1920s siding. From around 1835 until 1897, the yard was the site of the ‘Bower Yard White Brickworks’. Clay was mined from Benthall Edge and brought to the works via a tramway and small incline plane over the railway, also visible on the map. The brickworks owners were also barge operators, exporting most of their products by river. The works became the ‘Benthall Firebrick Works’ in 1897, although mainly making glazed sanitary pipes by the 1920s. It then became the ‘Benthall Stoneware Company’ before World War 2, finally closing in 1955.[5]