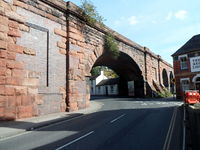 Wribbenhall Viaduct (Bridge 11), also referred to as Bewdley North Viaduct, is situated immediately north of Bewdley station where it can be seen from the platforms. The viaduct was built in 1859; the Chief Engineer and Resident Engineer being John Fowler and Henry Bridgeman who were also responsible for Victoria Bridge.

The viaduct was originally built using a combination of red brick and locally quarried sandstone. The latter was prone to weathering, and in 1915 large sections were cut out and replaced by blue engineering bricks. The viaduct is 112 yards in length, with seven brick arches of 25ft span and a larger skew arch of 48ft 9in span over the Kidderminster Road.

The viaduct is listed Grade II by Historic England for its special architectural or historic interest.[1]

North of Wribbenhall Viaduct, the Tenbury and Bewdley Railway and Severn Valley Railway ran parallel for around a mile on the left and right hand lines respectively. A plated girder passenger footbridge connecting Northwood Lane and Summer Hill formerly crossed over the lines a short way north of the Viaduct, but this was demolished in the 1930s.