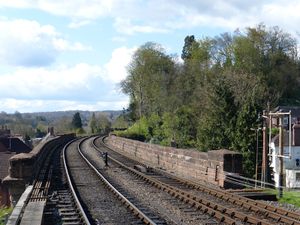 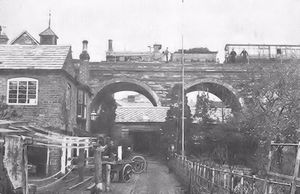 Wribbenhall Viaduct (Bridge 11), also referred to as Bewdley North Viaduct, is situated immediately north of Bewdley station where it can be seen from the platforms. It is listed Grade II by Historic England for its special architectural or historic interest.[1]

Construction of the viaduct began in 1859; the Chief Engineer and Resident Engineer being John Fowler and Henry Bridgeman who were also responsible for Victoria Bridge. Although the most of Bewdley station itself is cut into the sandstone rock and stands firmly on it, the viaducts at each end of the station are off the rock and stand on softer alluvial deposits. Wet weather in December 1860 impeded construction, causing a supporting wall to the embankment to collapse.[2]

The viaduct is 112 yards in length, with seven brick arches of 25ft span and a larger skew arch of 48ft 9in span over the Kidderminster Road.[3] At the north end, the embankment is supported by a sloping retaining wing wall or 'revetment' which extends for a further 65 yards.

The viaduct was originally built using a combination of red brick and local red sandstone. The sandstone came from a quarry at the top of what is now Maypole Close, just a few yards north of the viaduct. Although it appeared strong and hard when freshly cut, it was liable to soften, split and disintegrate when exposed to the atmosphere. This was probably known by the contractors at the time with its use being a cost saving measure; the stone and brickwork on Dowles Bridge and other structures on the Tenbury and Bewdley Railway built only about two years later by the same contractors is of a far better quality.[4][5]

By the outbreak of the First World War the stonework in the viaduct had deteriorated badly, especially on the south-west side and in the retaining wall along Kidderminster Road which were exposed to the wettest winds. In 1915 large sections were cut out and replaced by blue engineering bricks which can be seen on the main photograph.[4] The neighbouring Accommodation bridge off Northwood Lane underwent similar repairs at that time which included a date plaque set into the bricks. The largest repair appears to have included a similar plaque near the top, although this is no longer legible. One of the smaller repairs in the revetment carries a plaque dated 7-1915.

The viaduct was acquired by the SVRSevern Valley Railway in preservation at the end of 1972 as part of the southern section of the line between Alveley Colliery and Foley Park. In the early 1990s a survey was carried out. Since the time of the GWRGreat Western Railway repairs there had been further deterioration and much of the stonework was crumbling. Drains had become blocked and water had been seeping through the sandstone and soffits of the arches for many years, causing the mortar to deteriorate. The winter of 1992/93 saw a major refurbishment by the SVRSevern Valley Railway including installing a waterproof membrane and relaying of the track bed. The external contractors were William Jackson (Langley Green) Limited, who had previously been involved with the construction of Kidderminster Town Station in 1984-5. The work was combined with the rebuilding of the north end of Bewdley platform 1 which was in danger of collapsing down the embankment. Work began at the beginning of January 1993 and favourable weather enabled it to be completed on schedule in time for the season opening on 13 March.[4]

The viaduct has seen further major refurbishments since. In February 2018 work started on the long wing wall by contractors (Walsh Construction Ltd), using the same Cumbrian sandstone from St Bees quarry that the SVRSevern Valley Railway have used elsewhere on the viaduct.[6]

Preventative maintenance planned for 2020-2021 was put on hold due to the effects of the 2020 coronavirus disease (COVID-19) pandemic[7].

The viaduct and its revetments are a Grade II listed building, Historic England List Entry Number 1386197. They were first listed on 5 November 1998. The listing provides a more technical description of the structure as follows:

Railway viaduct. 1859-60; by Sir John FowlerHenry Fowler, Chief Mechanical Engineer (CME) of the Midland Railway 1909-1923, and of the London, Midland and Scottish Railway 1923-1933 and Henry Bridgeman, for the Severn Valley Railway Company. New red sandstone ashlar with brick arches and repairs. Eight bays. The principal bay at the NW end has a segmental skew arch with rusticated sandstone voussoirs, imposts and is flanked by pilasters. The other seven arches to the SE have brick round arch rings, the piers with sandstone imposts. Sandstone parapets with string and terminal piers. At the NW end the embankment is supported by a revetment extending for about 60 metres. Some later buttresses. 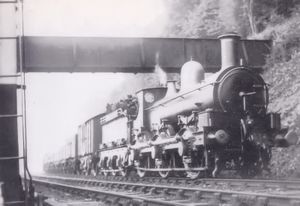 Proceeding north from Wribbenhall Viaduct, the Tenbury and Bewdley Railway and Severn Valley Railway ran parallel for around a mile on the left and right hand lines respectively. On 15 March 1892 the GWRGreat Western Railway Engineering Committee authorised construction of a plated girder passenger footbridge over the two lines around 150 yards north of the Viaduct, connecting Northwood Lane and Summer Hill. This was later demolished in the 1930s, although the brick footing on the Summer Hill side of the line is still visible next to the track bed[3].