Difference between revisions of "Timetables in commercial service" 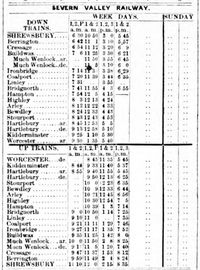 By 1900 the frequency of weekday services on the Severn Valley Branch had increased with five through services departing from Hartlebury for Shrewsbury. Five southbound services also left Shrewsbury with the first at 7:45am (during the 19th century the first departure was regularly before 7am). The second departure from Shrewsbury, the 8:45am, called at Hampton Loade, Highley and Arley by request only and then continued from Bewdley to Kidderminster. There was also a local service from Bridgnorth to Worcester at 7:35am, returning to Bridgnorth at 11:56am, with another local service from Kidderminster to Bridgnorth departing at 8:33pm and arriving back at 10:18pm. The single Sunday service ran north in the morning and returned south in the late afternoon as before.

1902 saw a similar timetable to 1900 on the Severn Valley Branch for through trains, with the variation in the second service from Shrewsbury, now at 8:35am, as before. The timetable also included a number of local trains[note 1] between Kidderminster and Bewdley, and between Bewdley and Hartlebury, working around the triangle formed by the three towns.

On the Tenbury Branch, five through services ran in each direction between Woofferton and Kidderminster on weekdays only, the second departure from Woofferton being a 'Mixed' train including goods.

In 1904 a sixth through service was introduced on the Severn Valley Branch on weekdays. By this time the majority of services only ran to and from Hartlebury, with just two southbound ending and one northbound beginning at Worcester. On 29 December 1904 a GWR Steam Railmotor was trialled between Kidderminster, Bewdley and Stourport, with a full service using two railmotors beginning on 2 January 1905. Foley Park Halt opened on the same day, and Rifle Range Halt opened in June of that year[6]

The 1910 timetable included a separate table for the Steam Railmotor service between Kidderminster, Bewdley and Stourport, described as "Motor Cars – One class only". These provided a regular weekday service starting before 8am and finishing after 9pm. One railmotor service also ran from Worcester as far as Bridgnorth.

On the Severn Valley Branch five services left Shrewsbury on weekdays as before, although starting and ending later in the day with the first departure now not until 8:30am. Two of the five were to Kidderminster. However there was a peculiar imbalance in the timetable, in that six full line services now arrived at Shrewsbury, the last of the day being from Kidderminster. On Sundays there was now no service to or from Shrewsbury, with the morning departure from Worcester terminating at Bridgnorth and returning in the evening. An afternoon railmotor departure from Worcester ran to Highley before returning immediately to Kidderminster.

The Tenbury Branch weekday timetable included six departures from Kidderminster to Woofferton, with one of the six return services originating from Tenbury. One return trip to Woofferton was by steam railmotor.

There were five weekday departures from Shrewsbury as in 1910, although for the first time the majority of these were to Kidderminster rather than Hartlebury. Four of the five return services originated at Hartlebury, but with the last departure now being relatively early at 5.30pm (a later departure now only ran as far as Bridgnorth rather than continuing to Shrewsbury). Times between Hartlebury and Shrewsbury still averaged around 2 hours, little changed from the previous century. Although locomotive performance had improved, there were often planned delays at Bewdley to provide connections with services between Kidderminster and the Tenbury Branch; for example the 5:30pm from Hartlebury included a 21 minute wait at Bewdley. A separate timetable was again provided for the 'local' service around the Kidderminster / Bewdley / Hartlebury triangle. The Sunday timetable did not show any services north of Bewdley.

On the Tenbury Branch, five services ran each way between Kidderminster and Woofferton.

In the early 1930s, the Sunday timetable included one Bridgnorth to Shrewsbury service and one service nicknamed the “Fisherman’s Special”. The latter left Birmingham Snow Hill at 7.22am, arriving at Shrewsbury via Kidderminster at 10.30am, with the return departing at 8.00pm, arriving at Snow Hill at 10.47pm.

The 1936 timetable for the Tenbury Branch included 5 passenger services in each direction between Woofferton and Kidderminster. By 1938 there were still five trains per day to and from Shrewsbury.

By 1875 the Midland Railway had upgraded the standard of third class and abolished second class,[note 2] with other companies soon following suit. Thereafter there was no longer a need to run 'Parliamentary' or 'Cheap' trains, although for many years railwaymen would, by tradition, continue refer to particular services in those terms. During the notorious Quintinshill accident in 1912, Signalman Meakin, realising the cause of the first collision, exclaimed to his colleague "You've got the 'Parly' standing there."