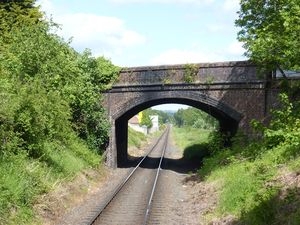 Bridge 5 carries the A451 Stourport Road over the SVRSevern Valley Railway. It also carried the Kidderminster and Stourport Electric Tramway between 1898 and 1929.

When the SVRSevern Valley Railway purchased the section of line southwards from Alveley Colliery in 1972, Stourport Road Bridge marked the new southern boundary of the railway. Beyond the bridge remained British Railways property.