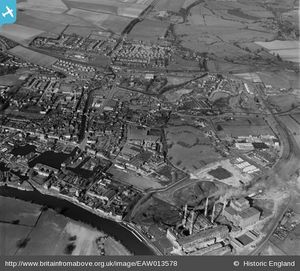 The area formerly occupied by the station is now part of a housing estate.

The origins of the Worcestershire town of Stourport date back to the completion of the Staffordshire & Worcestershire Canal in 1771. In that year John Wesley described Stourport as a "well-built village", but following the opening of the canal for trade in 1772 the village quickly grew into a town based around the large canal basins that served as the ‘port’, reaching a population of 1,300 by 1795.[6]

The early growth of Stourport saw a corresponding decline in the fortunes of Bewdley as a port.[7] However further significant growth of Stourport was effectively ended by the opening of the Worcester and Birmingham Canal in 1816. This provided a direct link between the two towns.

A description of the newly opened Severn Valley branch in 1863 describes: "Stourport is marked in the distance by three tall smoking chimneys, and as you pass through the station the sensitive nose detects the not unpleasant aroma of bark, leather-tanning being the staple trade of the town. Just before reaching the station the line crosses the little river which gives its name to the town, and we arrive within sight of the Severn"[8].