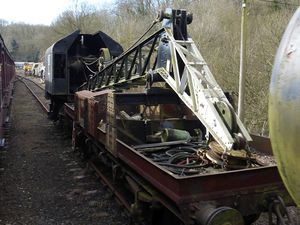 DW35 is a 6-ton capacity steam crane, built by Smiths of Rodley, Leeds in 1949 for BRBritish Rail or British Railways(W). The crane was mostly used at Radyr before being declared surplus to requirements at Swindon.

DW35’s predecessor, 2½-ton capacity ex-GWRGreat Western Railway steam crane GWR RS38, was used for engineering duties from 1968 until after the opening of the SVRSevern Valley Railway in 1970.[1] DW35, with its greater 6-ton capacity, was acquired by the SVRSevern Valley Railway in 1974 (the year services extended to Bewdley), arriving from Swindon on 31 May together with its crane runner match truck.[2] By winter of that year it was in use for permanent way work, having been "rejuvenated by the provision of a new boiler".[3] One if its first tasks was the considerable changes made in both track layout and position of signals at Bewdley that winter,[4] followed by the completion of Arley loop in spring 1975.[5] It soon became "the steam crane", with RS38 leaving in 1978.

Over the following years, DW35 continued in regular service on Permanent Way work up and down the line. It acquired the nickname Toby Jiblets which originated with Tommy Smyth, the redoubtable P.W.Permanent Way foreman for many years[6]. It was used on a number of major infrastructure projects, such as the refurbishment of Cleobury Road Bridge in winter 1978-79.[7] More routine work included the relaying of sleepers although, due to the crane's limited reach, it could only lay in half the sleepers in a 60ft length with the rest being lifted and dragged in by hand. In 1982 this resulted in the first use of a tractor fitted with a hydraulic arm,[8] foreshadowing the more recent use of On-track Plant such as Road-Railers.

DW35 was used on another major infrastructure project, the installation of Bridgnorth Bypass Bridge, during which it became the first vehicle to cross it on 27 February 1983.[9] The following year it played a major role in the construction and opening of Kidderminster station.[10] On 31 July 1994 it scored another 'first' by becoming the first item of rolling stock to be turned on the newly installed Kidderminster Turntable.

Use on permanent way and similar work continued well into the new millennium, for example helping with a major clear up at Kidderminster Carriage Shed in 2006 ahead of the opening of the new carriage washing plant.[11] It was also used after the 2007 Storm Damage; a picture of DW35 carrying out repair work at Highley appears on the front cover of Phil Sowden’s publication 'The story of the Big Flood'. However in recent years, lighter work of the type it used to carry out has been taken over by On-track Plant such as Road-Railers, with occasional heavier lifts being carried out by the Cowans Sheldon 30-ton steam crane. Consequently as of 2020[update] DW35 is stored in the siding at Eardington.

The crane is paired with Crane Jib Runner DW75, which was built by the GWRGreat Western Railway at Swindon in 1927 for an earlier steam crane.