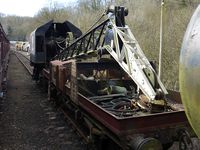 DW35 is a 6-ton capacity crane, built by Smiths of Rodley, Leeds in 1949 for BRBritish Rail or British Railways(W). The crane was mostly used at Radyr before being declared surplus to requirements at Swindon. Since arrival on the SVRSevern Valley Railway in 1974 it has been used for Permanent Way work up and down the line. It acquired the nickname Toby Jiblets, which originated with Tommy Smyth, the redoubtable P.W.Permanent Way foreman for many years[1].

The crane is paired with Crane Jib Runner DW75, which was built by the GWRGreat Western Railway at Swindon in 1927 for an earlier steam crane.