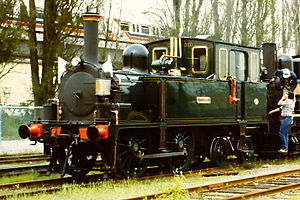 In 1870 the 3rd Duke of Sutherland financed the extension of the Highland Railway line from Golspie to Helmsdale via his own Dunrobin Castle. In return he received his own private station for his castle (still in use today as a public station on the line from Inverness to Thurso). He also received the powers to run his own train on the lines owned by the Highland Railway. He had his own carriages and locomotive built for the purpose.

Dunrobin is an 0-4-4T, built by Sharp Stewart & Co of Glasgow in 1895 to order number E1056. One of the unique features was the enlarged footplate and enclosed cab with a 4 person upholstered seat set high up at the back. It was used until around 1920 to pull the Duke’s private train between Dunrobin Castle and Inverness. In 1949, the new British Railways revoked the powers of the Duke to travel in his own train.[1]

Dunrobin and a saloon were sold in 1950 to the Romney, Hythe and Dymchurch Railway. The locomotive ran large parts of the 700+ mile journey under its own steam. The locomotive was exported to Canada in 1965, but acquired in January 2011 by the Beamish Living Museum of the North[2] and repatriated to the UK. On arrival, Dunrobin was brought to Bridgnorth on 19 May 2011 to be dismantled and the feasibility of restoration to working order assessed. Contracts were subsequently let to Severn Valley Railway Engineering Services for boiler and mechanical overhaul at Bridgnorth Loco Works.

Progress on the overhaul saw work on the locomotive's rear bogie truck completed, and work on the chassis. By early 2018 the boiler boiler was largely complete (and awaiting assembly), with a great deal of new material incorporated including new barrel, firebox outer wrapper skirts, all new stays, new longitudinal and palm stays, overhauled dome, new smokebox and new internal components such as the J pipe also being replaced.[3] New tanks were completed at Dinas.

When Beamish bought the locomotive they could see some cracks in a small number of spokes. Once these were stripped at Bridgnorth, a great deal more cracks were revealed, to the extent that an independent inspection was commissioned using the magnetic particle inspection technique. The renewal of all four ‘driving’ wheels (coupled wheels) was instigated in 2018, the crank axle being retained, whilst the rest (wheel centres, tyres, front axle and crankpins) entirely new manufactured at South Devon Engineering.

A new cylinder block was commissioned and cast in 2014, however issues require remedial attention. As of March 2019[update] the reworked block is awaited, before rewheeling can commence.[4]. Otherwise the project is making slow but steady progress, with parts being reassembled. Beamish Transport Online blog has regular updates on progress of the work.

The photograph below shows work in progress in March 2012.

The Highland Railway DrummondDugald Drummond, Locomotive Engineer, later Chief Mechanical Engineer (CME) of the London & South Western Railway 1895-1905 “W” (or "397"?) class comprised four locomotives built in 1905–1906 and were built to a similar design, the last engines built at Lochgorm works in Inverness. The LMSLondon Midland & Scottish Railway gave them a power classification '0PThe British Railways system of classifying steam locomotives by power using a number from 0, least powerful, to 9, most powerful, followed by either F for freight, P for Passenger or MT for Mixed Traffic.'. Two survived to 1956/7, the last HR locos in service. Two GWRGreat Western Railway 1600 Class 0-6-0PT locomotives (1646/49) took over the work from Helmsdale - Dornoch line.