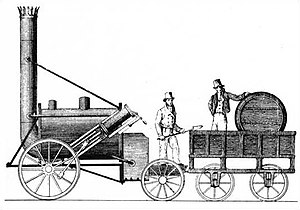 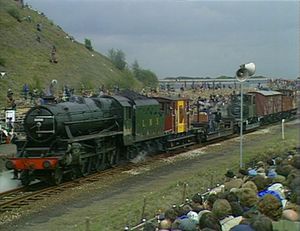 The original Rainhill Trials were held in October 1829 to test George Stephenson's argument that locomotives would provide the best form of motive power for the soon-to-be-completed Liverpool and Manchester Railway. Stephenson's Rocket was the only locomotive to complete the trials and was declared the winner.[1]

Rocket 150 was an event organised by British Railways London Midland Region and held at Rainhill on 24-26 May 1980 to celebrate the 150th anniversary of the opening of the Liverpool and Manchester Railway and the trials the year before.[2] Each of the three days featured a 'Grand Cavalcade' of locomotives and rolling stock in which a number of SVRSevern Valley Railway locomotives and carriages took part.

Planning for the SVRSevern Valley Railway's participation in the Rocket 150 celebrations at Rainhill began in 1979. General Manager Michael Draper reported that the commitment was to provide "perhaps as many as 6 or 7 of our locomotives for display, the largest single contingent from any private enterprise railway in the country". LNWR 3020 Cornwall was lent to the SVRSevern Valley Railway in August 1979 by the Department of Education and Science, with the intention of being restored to working order and taking part[3], but was forced to withdraw when the BRBritish Rail or British Railways boiler inspector put his hammer right through the front ring of the boiler barrel.[4] Ivatt 'Mickey Mouse' 46521 was initially planned to be used but major boiler repair work made this impossible and 3205 was substituted.[5]

In 1975, three of the four SVRSevern Valley Railway engines plus carriages which attended the Rail 150 celebrations at Shildon had travelled there in steam. The SVRSevern Valley Railway intended for its locomotives to travel to Rainhill in the same manner, as part of railtours in the case of 43106, LMS 5000 and 4930 Hagley Hall and light engine in the case of the other participants.[6] Hagley Hall was declared out of gauge for the Earlestown and Rainhill platforms just a fortnight before the event so could not take part, with Didcot's 5051 Drysllwyn Castle (a.k.a. Earl Bathurst) standing in. Boiler repairs to 43106 could not be completed in time to double head 'The Black Countryman' Railtour with 45000 on 19 April 1980, so 80079 was promoted as a late substitute for the Rainhill event and allowed to double head the railtour from Hereford to Manchester with special dispensation from BRBritish Rail or British Railways, tank engines not normally being permitted on the main line because of lack of water capacity. From Manchester Victoria the pair moved light engine to Northwich depot (8E) where they remained until the Tuesday before Rainhill. Both were steamed for the Northwich Open Day on Sunday 18 May, sporting 8E shed plates; LMSLondon Midland & Scottish Railway 5000 also provided the rare sight of steam working a BRBritish Rail or British Railways freight in the 1980s by double-heading a class 25 diesel on 18 hoppers from Plumley to Winnington Works.[5]

Plans for the other light engine moves to Rainhill were frustrated when on Saturday 17 May, LMSLondon Midland & Scottish Railway Princess Royal Class 6201 Princess Elizabeth started line side fires in the Ruabon area, leading to the imposition of a steam ban. As a result, a diesel-hauled convoy of SVRSevern Valley Railway locomotives and rolling stock departed for Rainhill on Monday 19 May[5].

During the Rocket 150 event, the locomotives were stabled at the nearby Bold Colliery sidings. SVRSevern Valley Railway footplate staff crewed the SVRSevern Valley Railway engines within the Bold complex, with BRBritish Rail or British Railways crew taking over for the three miles from Bold through St. Helens Junction and Rainhill to Whiston cutting. Most of the daily journey was accomplished at 10 mph, with a 200 yard gap between each item.[5]

Other locomotives which took part in the cavalcades and became SVRSevern Valley Railway residents at a later date were:

The locomotives participating and the order in which they appeared varied slightly from day to day. 'Rocket' failed to run on the first day,[8] while 'Novelty' was on different occasions assisted by a Class 08 shunter and by 'Lion'.

After 'Rocket 150' finished, a class 25 with 3205, 600 Gordon, D1062 and the two GWRGreat Western Railway coaches (plus a 6000 Locomotive Association coach) left Bold Colliery on Thursday 29 May, reaching Bridgnorth in the late evening apart from Gordon and the 6000 LA coach which were detached at Hereford. Gordon remained at Hereford until 10 June, moving from there in steam to Tyseley for tyre-turning and returning to Bewdley via the Lickey Incline, also in steam, on 3 July.[5]

43106, 45000 and 80079 were exhibited at a very un-publicised Bold Power Station Exhibition from 27 to 31 May. By Monday 9 June the fire danger was pronounced 'over', allowing 43106 and 80079 plus the LMSLondon Midland & Scottish Railway coach to return from Bold to the SVRSevern Valley Railway in full steam. LMSLondon Midland & Scottish Railway 5000 moved in steam from Bold back to Northwich on 10 June, and was then stored until working the Manchester Victoria to Liverpool Edge Hill return special on Sunday 22 June, returning to the SVRSevern Valley Railway the following day[5].