Northwood Crossing viewed from the South. 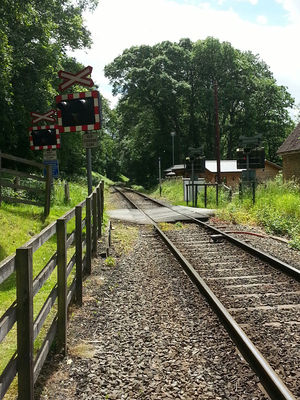 Northwood Crossing viewed from the North.

This level crossing is immediately south of and adjacent to Northwood Halt. It allows access from Northwood Lane to the Hill Farm estate via a private single track road.

During the BR era, the unmanned crossing was the site of two separate fatal collisions:[1]

Following an inspection in April 1972 in advance of the SVRSevern Valley Railway re-opening this section of the line, Maj. Olver of the Railway Inspectorate recommended that the crossing should be fitted with gates capable of closing across the road and the line as appropriate. The gates and posts from the level crossing near Burlish Halt were retrieved for this purpose,[2] although there is no record that they were ever installed.

From re-opening, a hand signalman was required to be present during operations. To remove the need for this, a successful application was made to the Department of Transport in 1979 for Northwood to be made an 'open' crossing.[3] Equipment for this was duly installed, and the crossing was commissioned on 5th July 1980.[4][5] The crossing has no gates or barriers, but is protected by flashing lights displayed to road traffic together with an audible warning (the only crossing on the SVRSevern Valley Railway protected in this fashion). The warning lights are operated automatically by track circuits, with treadles as a back up, with a white light displayed to the train to indicate that they are operating correctly. The lights and track circuits work at 24v via a mains supply. In the event of the supply failing, the system automatically switches to battery power and illuminates a warning light in Bewdley North signal box. Modern-style warning boards consisting of a black cross on a white square background are positioned on the approach to the crossing in both directions.

Despite these measures, in November 2000 the crossing was the site of a collision between southbound 8F 48773 and a van. On this occasion prompt action by the engine crew meant the train had almost come to a halt and nobody was injured in the collision. HM Railway Inspectorate found that the crossing equipment was in full working order, and later confirmed that the Railway was not at fault.[6]

The original timber crossing was replaced with a ‘Holfast’ prefabricated crossing in 2004.[7]

The crossing has featured in a number of film and TV productions including: