Black 5s, like most locomotives, were frequently modified during their working life. On withdrawal, 45000 was chosen to be included in the National Collection as the only surviving example with its original short firebox and domeless boiler.

45000 arrived at the SVRSevern Valley Railway on loan from the National Railway Museum on 19 November 1977, with the intention of being restored for main line working. Stripping the locomotive began straight away, the first task being to empty several barrow loads of ash from the smokebox left over from the last steaming 10 years earlier. However pressure of work on other SVRSevern Valley Railway locomotives then delayed serious progress until late 1978, with the boiler being lifted by the 30 ton steam crane in Christmas week. The boiler work required complete replacement of all 21 big and 136 small tubes plus renewal of a number of firebox stays. This was completed in time for the boiler to be reinstalled on Easter Saturday, 14 April 1979. A rail tour planned for June of that year led to much ‘burning of the midnight oil’, an example of which being that 5000 moved under her own power for the first time at 1.00am on Saturday 28 April.

The restoration was duly completed and the locomotive entered service in LMSLondon Midland & Scottish Railway livery as No 5000, moving light engine to Hereford on 1 June 1979 in time to work a rail tour the following day[1]. The SVRSevern Valley Railway later won the 1979 ARPSAssociation of Railway Preservation Societies award for restoring 5 locomotives in the year including LMSLondon Midland & Scottish Railway 5000.[2] 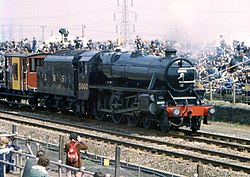 LMSLondon Midland & Scottish Railway 5000 at Rainhill in 1980 (Wikimedia Commons)
45000 took part in the grand parade at the Rocket 150 celebrations at Rainhill in May 1980. Other main line working was carried out from Steam Centres around the country, including the Bulmers Railway Centre at Hereford. Between 1979 and 1988 the locomotive accumulated 34,774 miles on the SVRSevern Valley Railway and in the course of some 20+ rail tours on the main line. Mileage by year was as follows:

A potentially incomplete listing of main line tours is as follows:

During her time at the SVRSevern Valley Railway, LMSLondon Midland & Scottish Railway 5000 was sometimes described as Chief Engineer Alun Rees's "personal locomotive",[3] with sister locomotive 45110 becoming "the Company Black 5". In summer 1982 the locomotive was briefly withdrawn from service while a 2ft 6in crack in the steel firebox door plate was repaired.

The locomotive failed a steam test at the start of the 1989 season,[4] and was returned to the NRM in the spring of 1991.[5] It can normally be seen on display at Locomotion (the NRM museum at Shildon) or the NRM at York.[6]