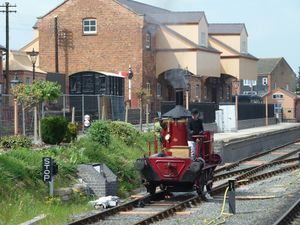 Although it works closely with the SVRSevern Valley Railway, Kidderminster Railway Museum is run by an independent organisation formed by a group of SVRSevern Valley Railway members in 1989. The Museum, which opened the following year, is housed in the 1878 constructed two-storey former GWRGreat Western Railway grain and wool warehouse adjoining Kidderminster station.

On 23 May 2001 The Heritage Lottery Fund awarded the Trust £177,500 for roof and canopy restoration, to provide additional storage space for the museum's collections and release further floorspace for new displays.[3]

This border marker was formerly located on the Tweedmouth to Kelso line.[4] It was erected on the Museum site in 2016.

The Guild of Railway Artists stages its annual (previously biennial) art exhibition at Kidderminster Railway Museum. Frank Hodges, chief executive officer of the Guild was reported by the Kidderminster Shuttle in 2014: "The Guild looks upon the museum as its home venue having exhibited some ten times since its first event there in 1994.”[5] Further exhibitions were held or planned as follows:

As an unconnected enterprise, The Engine House at Highley displays a collection of larger items such as locomotives and rolling stock.


List of Charities associated with the SVR
SVR Archives