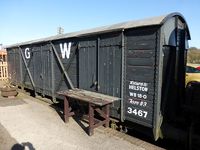 The fund also is a minor shareholder of Severn Valley Railway (Holdings) PLC.[1]

The Fund organises an annual gathering of classic motorcycles at Hampton Loade Station, normally in October with up to 20 vehicles in attendance. It has been taking place for many years although 2016 was the first time it was publicised, via Hampton Loade Station's Facebook page. It does not usually publish a list of exhibits, generally owners who are available simply bring their bikes on the day.