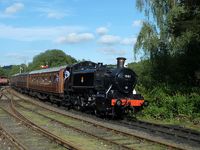 In Autumn 1970 all three 1500 class locomotives were acquired from Coventry Colliery for use on the SVRSevern Valley Railway. 1501 was initially moved from Coventry to Tyseley for wheel turning, before a further move to Bewdley, both moves being by rail behind a diesel. During the latter move, excessive speed caused damage to one of 1501’s axle boxes. The other two NCBNational Coal Board locos (1502 and 1509) were used as a source of parts for restoring 1501; the remains were then scrapped.