Difference between revisions of "GWR 134290 Fruit A Van" 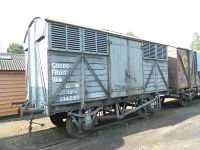 The van was awaiting scrapping at BarryWoodham Brothers Scrapyard, Barry, South Wales. The source of many locomotives now in preservation. in 1970 when purchased by an SVRSevern Valley Railway member. It was initially used as a stores van but later overhauled in 1989.

It is photographed at Bewdley.