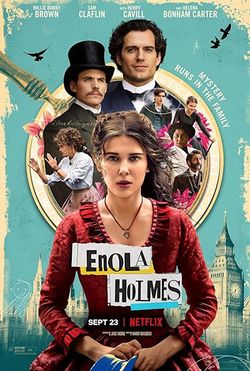 Enola Holmes is a Legendary Pictures film, based on the book series of the same name by Nancy Springer, written by Jack Thorne, co-produced and featuring Millie Bobby Brown and directed by Harry Bradbeer. It stars Millie Bobby Brown as Sherlock Holmes' teenage sister Enola, with Henry Cavill as Sherlock Holmes, Sam Claflin as Mycroft Holmes and Helena Bonham Carter as Enola's mother Eudoria. Enola discovers her mother missing and she sets off to find her, becoming a sleuth as she outwits her famous brother and unravels a dangerous conspiracy around a mysterious young Lord.

It was released on Netflix on 23 September 2020, having been delayed by the 2020 coronavirus disease (COVID-19) pandemic. In May 2021 Netflix announced on Twitter than a sequel was in production[1].

Filming took place between Kidderminster and Arley from 14 to 17 July 2018 with that area of the railway closed to the public. Passenger services ran between Bridgnorth and Highley using a special 'Timetable D'.

Preparations for filming began the week before. At Kidderminster parts of the concourse were repainted from their normal GWRGreat Western Railway colours into maroon, while posters and other props appeared referring to Basilwether station. The station buildings at Arley were repainted green with the station sporting a 'Ferndell' running-in board.

The SVRSevern Valley Railway was contractually bound not to publicise the filming or the film being shot, although photos from publicly accessible viewpoints showed the changed station names and allowed the film to be identified. In June 2020, 'First look' articles about the Enola Holmes film, including still images, first appeared in the press and on YouTube. One of the images shows Enola, Sherlock and Mycroft Holmes on a station platform in front of a GWRGreat Western Railway toplight carriage. The photograph was taken on Platform 1 at Arley (features such as Arley Station Bridge and reflections of the station buildings and signal can be identified), with the carriage being 3930.

Post-production, the film was augmented by CGI footage with differences in locomotive and length of train.

A previous Sherlock Holmes movie was filmed on the SVRSevern Valley Railway in 1976, The Seven-Per-Cent Solution.