Platforms 2&3 share a canopy, built in 1878, giving passengers protection from the weather. The canopy, featuring timber frames on cast iron pillars was extended around 1900 with the new section supported on steel frames. 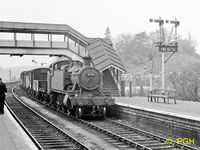