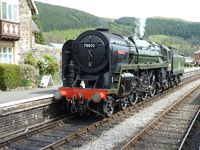 BRBritish Rail or British Railways Standard Class 7 No 70000 Britannia was resident on the SVRSevern Valley Railway between 1971 and 1989.

Britannia arrived at the SVRSevern Valley Railway in April 1971 for restoration to be completed. This was achieved in May 1978, 12 years, after the locomotive had last steamed. 70000 was renamed ‘Britannia’ at a ceremony on 20 May 1978 by Mr R A RiddlesRobert Arthur "Robin" Riddles, Member of the Railway Executive for Mechanical and Electrical Engineering responsible for the design of the British Rail Standard Class locomotives, the locomotive’s designer.

Britannia left the SVRSevern Valley Railway in spring 1989. After a period of ownership by Pete Waterman, the locomotive bought by Jeremy Hosking and was transferred to the Royal Scot Locomotive and General Trust [1]. As of February 2015 it is operated on the main line by Icons of Steam[2].