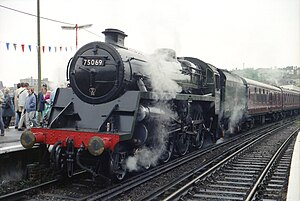 75069 was one of the final batch allocated to the BRBritish Rail or British Railways Southern Region, which were built with a larger tender giving greater coal and water capacity but with the same route restrictions as the Standard Class 5.

75069 was built in 1955 at BRBritish Rail or British Railways’s Swindon works and entered traffic at Dover. After just 11 years in service around London and the South Coast, the locomotive was withdrawn from service at Eastleigh in September 1966.[1]

75069 arrived on the SVRSevern Valley Railway from Barry Scrapyard on 31 March 1973. Fund raising was helped by a raffle organised by the SVRA Birmingham Branch in 1973,[2] and a further raffle to help fund the restoration and boiler re-tube in 1978.[3] In 1983 another raffle organised by the SVRA Birmingham Branch was held to raise funds for superheater elements.[4] The restoration which lasted more than 11 years was completed just in time for the locomotive, still in undercoat, to take part in the September 1984 Enthusiasts’ Weekend.[5]

In addition to service on the SVRSevern Valley Railway during the following 10 years, 75069 also made a number of appearances on the main line. In 1987 the locomotive was due to work a full Cardigan Bay Express season along with 7819 Hinton Manor, but was unable to complete this due to a crack in the back left hand flange of the firebox.[6] 'Mickey Mouse' 46443 was sent to Machynlleth to deputise and proved a worthy replacement. The firebox was repaired by the insertion of a new copper lap and a re-studded seam;[7] however subsequent investigation of the boiler led to 75069 missing the 1988 season while the flue tubes were replaced.[8]

75069 resumed service in 1989 and also returned to main line duties in 1991. The last main line tour was a one-way working from Kidderminster to Minehead in April 1994, following which 75069 spent the season on hire to the West Somerset Railway. During the visit, the boiler incurred some failures to tubes and elements and following a return by road, cracks were found in the back firebox flange, resulting in the locomotive being withdrawn from service.[9]

After a lengthy period in storage, hopes of a return to service were raised in early 2009 when work was carried out to assess the condition of the boiler. However this assessment revealed that significant work would be required[10] and 1501, seen as a potential quick turnaround, was selected for overhaul instead.[11] 75069’s Heavy General repair finally began in early 2013[12]: the boiler barrel and much of the firebox was entirely new and many of the fittings and almost all of the pipework were replaced. A new cab, new smokebox and chimney, replacement steelwork in the tender coal space and new drag box were among other major repairs. Work cost over £900,000 and involved more than 25,000 man hours of effort.[13][14] Although initially advertised as returning to traffic prior to both the 2017 and 2018 Autumn Steam Galas, the locomotive's first test runs started 11 December 2018 with her boiler exam two days later.[15] She returned to traffic 16 February 2019 at the start of the season's services.

In the early morning of 22 July 2019, 75069 collided with a fallen tree between Hampton Loade and Country Park Halt while running light engine from Bridgnorth to work a service train from Kidderminster. The locomotive’s bogie was derailed and although the bogie axles were found not to have been bent, a number of front end fittings were damaged including the guard irons, steam heat and vacuum pipes, and a cylinder drain cock casting and drain pipe.[16] After repairs, the locomotive resumed service on Friday 6 September.