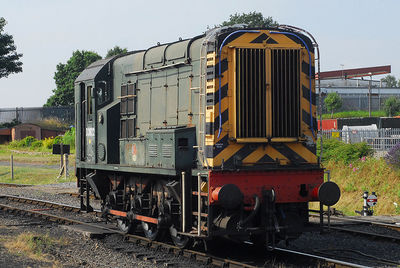 Class 08 locomotive D3022 was one of the first 25 built to Lot 232. Class 08 locomotives could have a number of different design features; this particular example is unusual in having two vacuum exhausters and a chainAs a unit of measurement, 22 yards or 1/80th of a mile driven speedometer[1].

Entering service in May 1953 and numbered 13022 under the original British Railways numbering scheme, it was allocated to Cricklewood Depot in North London. In 1961 it was renumbered D3022, and in the early 1970s it was transferred to the Eastern Region of British Rail, allocated to Stratford Depot. Renumbered 08015, it moved north shortly afterwards to spend its final years with British Rail based at Shirebrook in the Nottinghamshire coalfield. It was withdrawn from Tinsley Depot, Sheffield, in September 1980[2] and moved into store.

D3022 is normally based at Kidderminster as a pilot loco, and is currently in BRBritish Rail or British Railways green livery.[3]