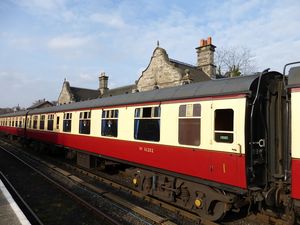 BRBritish Rail or British Railways Mark 1 Corridor CompositeCarriage having more than one class of seating, ie First and Third or latterly First and Standard. (CK) 16202 was built at Derby in 1961 to diagram number 128 of lot number 30666.

16202 arrived on the SVRSevern Valley Railway in May 1977 from Micheldever. It was refurbished in 1999, with a further overhaul and repaint in 2011. It is normally used in the BRBritish Rail or British Railways Crimson & Cream running set, and is owned by SVR(H).