Difference between revisions of "Arley" 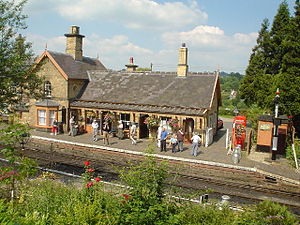 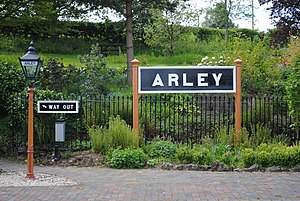 Running in board, down platform.

Arley station has two platforms and a signal box, allowing trains travelling in opposite directions to pass.

Barrow crossings are located at both ends of the platforms, but may not be used by the general public. Bridge 17 is located at the south end of the station, immediately south of the barrow crossing, and is the main passenger route between the platforms. Skeet's Farm crossing is also located in the station area, immediately north of the goods yard.

During periods of lighter traffic, when Arley signal box is switched out, all trains use the platform adjacent to the main station building.

From January to Easter 2011 the SVRSevern Valley Railway's winter works dealt with severe damage at Arley due to ground movement caused by failed drainage, in turn occasioning track twist. The UpIn reference to the direction of travel means towards the major terminus (i.e. towards Kidderminster on the present day SVR) platform was rebuilt, drainage installed and track relaid at a cost of £367,000.[1][2]

In February 2017 the waiting room at Arley Station became licensed to hold civil marriages and partnerships, with space for up to 21 people. Further information on packages may be found on the SVR website Wedding Day Packages page.

Arley was until 2018 also the site of Santa's Grotto for the Santa Special services. From 2020 it hosted the plays that formed part of the SVRSevern Valley Railway's Christmas services.

The village itself is named Upper Arley (also historically Over Arley[3][4]), which differentiates it from the similarly named, but differently spelled Areley Kings less than six miles away near Stourport.

Until 1895 Arley, including the railway, was part of a narrow neck of Staffordshire bounded on three sides by Shropshire and Worcestershire until it was moved to Worcestershire[5][6].

Arley station does not have a public car park.

Until 2020 there was a small café building behind the station which served hot and cold drinks and snacks, but has not reopened after the 2020 coronavirus disease (COVID-19) pandemic.

Several film and TV productions have scenes from, or been filmed at, Arley.

The station has temporarily carried other identities connected with filming.

A row of Victorian railway cottages was built in the yard as a film prop. After final filming the cottages were dismantled and retained, but despite reminders to the BBC about what they wanted with them they gave no response. Ultimately they were broken up with the assistance of the Junior Club.

The garden on the main platform by the Gents WC was created by the BBC and is known today as the BBC garden.

The signalbox had a name plate above the door.

The main station building at Arley dates from the opening of the Severn Valley Railway in 1862. Extensions were later added, consisting of a Ladies' waiting room authorised in 1892 and an additional bedroom in the Station Master’s house added in 1901.

The shelter on Platform 2 is also original, dating from the opening of that platform in 1883.

The café building behind the station was built during the summer of 1992 on the site of the former weighbridge. It replaced a similar building known as 'Tom’s Cabin' that had become dangerous.

In 2016, a number of stone sills, coping stones and quoins were replaced.

In 2018 an SVRA raffle raised over £7,000 for new facilities including a workshop and storage for Santa equipment to replace a small corrugated metal shed next to the gift shop.[7] In late 2019 construction started on the new building at the north end of the station, with the roof coming from part of the old Bewdley platform canopy. It was also partly funded by the Arley Station Fund[8].

When the SVRSevern Valley Railway first re-opened the line between Hampton Loade and Bewdley in 1974, there was no facility to pass trains, the UpIn reference to the direction of travel means towards the major terminus (i.e. towards Kidderminster on the present day SVR) loop (the running line nearer the station building) having been removed by BRBritish Rail or British Railways in the 1960s. This was re-laid over the next year and re-opened on 25 May 1975.

The telephone kiosk on Platform 1, which can be seen in the main picture above, was acquired from the P.O. in Birmingham circa late 1981, having been vandalised ‘beyond economic repair’[9]. Once at Arley it was duly repaired, and within a year had been returned to full working order[10].

An Anderson shelter was erected in the picnic garden in 2018, where it could be seen during that year’s ‘Step Back to the 1940s’ weekends. More than 3.5 million of these shelters were issued to the public before and during World War II to provide shelter from bombs and shrapnel. This particular example was originally installed at a house in Weoley Castle, Birmingham, and was donated to the SVRSevern Valley Railway by Lisa Priest of Birmingham City Council and Mrs Dorothy Sigures of Weoley Castle.[11][12]

Station masters at Arley since preservation have been as follows: 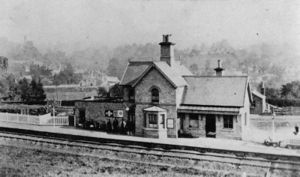