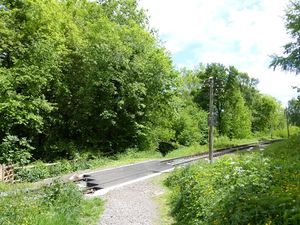 A crossing located close to the site of the former Alveley Halt, located on the Northern side of Highley bank. The photograph is taken from the footpath on the west of the line, with Highley Station towards the right. The small gate on the left of the photograph leads down to the present day Severn Valley Country Park, the location of the former Alveley Colliery. The Halt was situated immediately to the left of the photographer's location.

The 1905 Ordnance Survey Map shows that the crossing stood on a footpath linking the villages of Highley to the west of the Severn and Alveley to the east. The river was crossed by a ferry; the footbridge which stands around 100 yards up-river was a later addition.

The Shropshire Archives includes a “Petition for the repair of footpath from Alveley to Potters Load Ferry” dated 1899[1].