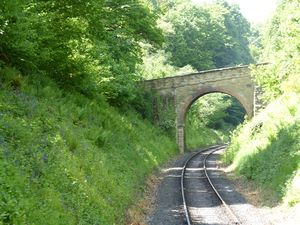 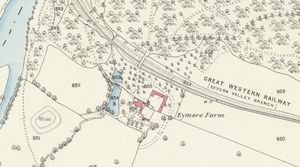 OS map of 1885 showing the farm and bridge
Trimpley Private Road Bridge (Bridge 14) carries the private access road from Trimpley Waterworks to Trimpley Reservoir over the railway. It is located at milepost 140¼.

Although the reservoir and waterworks were built in the 1960s, the bridge dates back to the 19th century and the era of the construction of the railway. It provided access to Eymore Farm, which was located immediately south of the railway, from Eymore Wood to the north of the railway. During the Second World War Eymore Farm was a base for the local Home Guard; there were trench positions nearby for guarding Victoria Bridge.[1]

The reservoir was constructed in 1964 and commissioned in 1967.[2] The main farm building has been demolished to make way for a terrace of 4 houses,[1] while its extensive gardens are mostly lost under the reservoir.[3][4] A converted barn from the farm is now used as a clubhouse by Trimpley Sailing Club.[5]

During the BR era the road bridge was numbered Bridge 19. It is part of the southern section of the line bought at the end of 1972 and opened in May 1974. In summer 1974, SVRSevern Valley Railway News noted "Other events of interest on the property front are the sale of bridge No. 19 at Trimpley to Birmingham Corporation."[6]