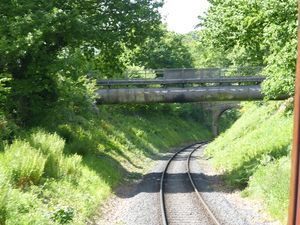 Trimpley Pipe Bridge from the South, with Bridge 14 also visible.

Bridge 13 carries a large water pipe over the railway, connecting Trimpley Reservoir to the waterworks on the east side of the line. The Pumping station was opened in 1967, dating the pipe to that time, during which period the southern section of the line between Alveley Sidings and Foley Park was owned by British Rail.

Towards Kidderminster
List of infrastructure
Towards Bridgnorth
Trimpley Reservoirs & Waterworks