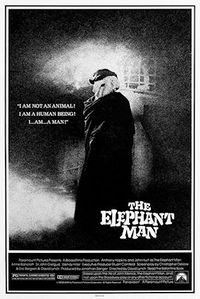 Film poster for The Elephant Man
The Elephant Man was a 1980 BAFTA award winning film directed by David Lynch and starring Anthony Hopkins, John Hurt, Anne Bancroft and John Gielgud. It was filmed in black and white and tells the story of Joseph Merrick (called John Merrick in the film), a severely deformed man in late 19th century London who was exhibited in a freak show as the "Elephant Man".[1]

On the Elephant Man's return to London from his captivity in France, there is a brief train running scene (lasting only a few seconds) which was shot on the Severn Valley Railway.[2] A distant shot across Trimpley Reservoir is followed by LMS Ivatt Class 2 46443 emerging from Arley Station Bridge having passed through the station at speed. 46443 carries the smokebox number 644, the same number used when the locomotive appeared in MRMidland Railway livery for the filming of The Thirty Nine Steps. The latter shot may be seen at the beginning of this YouTube clip.

Comparison of the two films confirms that both scenes in the Elephant Man used the same footage originally filmed tor The Thirty Nine Steps, although converted to black and white and using a consistent aspect ratio to match the rest of the film.