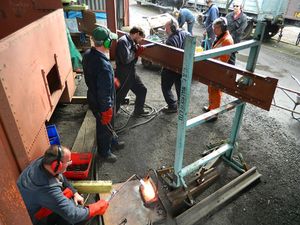 Fund members at work at Bewdley

The 4150 Fund is a Community Benefit Society, Registration Number 8179. The Fund publishes an annual newsletter.

The 4150 Fund began as an unincorporated body with a number of 'shareholders'. It was launched in March 1973 to purchase GWRGreat Western Railway 2‑6‑2T No 4150 from Barry Scrapyard, for the price of £2,750.

4150 left BarryWoodham Brothers Scrapyard, Barry, South Wales. The source of many locomotives now in preservation. in 1974 and in company with 7812 Erlestoke Manor was towed by Class 25 diesel to the DeanWilliam Dean, Chief Locomotive Engineer of the Great Western Railway 1977-1902 Forest Railway at Parkend. However site difficulties meant no work took place, and led to the Fund deciding to move the locomotive to the SVRSevern Valley Railway. The move to Bewdley took place in January 1978, again by rail.

By the mid-80s fund raising and restoration progress had slowed. In November 2006 an EGM was held and a new committee was formed to restart and complete the restoration, which continues. 80 of the original Shareholders were traced, twelve of whom increased the number of shares they held, and a new issue brought in a further 68 Shareholders. A recommendation to amend the constitution to 'one member, one vote' was however rejected as, although an overall majority were in favour, it failed to reach the required majority of two-thirds. By 2008 a referendum had been held with a unanimous result in favour of adopting a new Constitution, which came into effect on 1 January 2009. The 2008 AGM was informed that a few Fund spares had been recovered by the Trustees, but some were unaccounted for.

On completion of the restoration the SVRSevern Valley Railway will operate 4150 on a commercial agreement with the Fund.

The Fund organised Peep Behind the Scenes, an annual fundraising event, between 2010 and 2016.

Each year from 2016 the Fund has run an Evening Social Special, a special train which departs from Kidderminster for a full return trip and provides suitable liquid refreshments.[5]