I gave up on the template idea, that's just a table with embedded images and links, which ends up looking and behaving the same.
At the moment, I can show the table with no borders, or I a can align it to the right, but not both at the same time.
For some reason, aligning it to the right puts a 1 pixel border round every cell, which shows up as breaks in the red line.
--Graham Phillips 110 (talk) 10:14, 15 January 2015 (UTC)

A "straight" diagram of the SVRSevern Valley Railway is always confusing, I think, as it is really a "U" shaped route. Gives the impression the mainline connection goes to the left at Kidder. I suppose the diagram could be made the shape of a reverse "J" but that might not fit the page so well, or may be more complicated? Just a suggestion! Sharpo (talk) 11:01, 15 January 2015 (UTC)

If at first you don't succeed, cheat.
It is now a 1x1 table with all the icons and links in the single cell, separated by line breaks. It seems to work.
I've labelled it as a schematic map, I'll still create an accurate geographic imagemap map as well, but I need a suitable map to base it on first.
--Graham Phillips 110 (talk) 12:52, 15 January 2015 (UTC)

Had a go at drawing the route of the Railway to scale, copied from a map. 3 major towns shown, also river, railway & most roads (but not the country lanes) 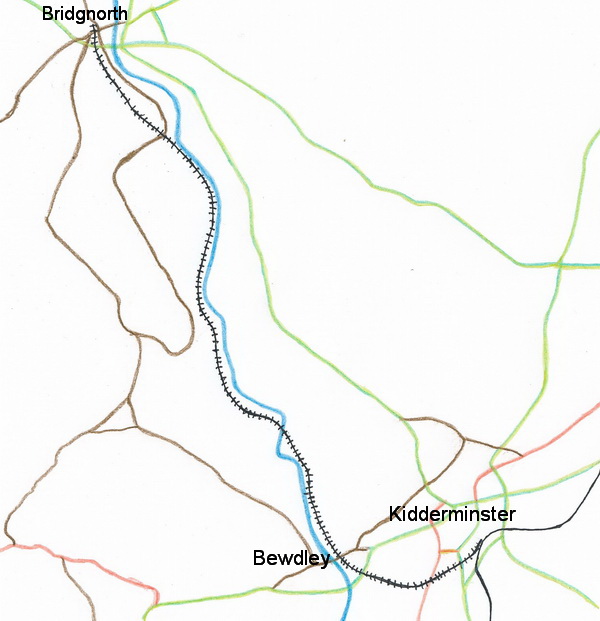 It's far from perfect but is less overpowering than copying a map with too much detail on. Is it worth trying to develop it further by adding smaller villages & marking the stations? Sharpo (talk) 22:47, 15 January 2015 (UTC)

I really like the map on the front page - it worked out even better than I expected! I also have to praise Sharpo's mapmaking abilities. For the "From the window" leaflet, do you mean the map that covers several pages? I wonder if there might be an original version of that all in one piece, although the problem there is that it would be a rather large image. --Danny252 (talk) 10:49, 16 January 2015 (UTC)

Yes, I was going to try to reproduce it more or less as it is with a link at the top and bottom of each page to the next page.
I've emailed the Marketing & Communications Manager to ask permission to use the original image file. I've also asked for permission to use the SVRSevern Valley Railway logo.
--Graham Phillips 110 (talk) 11:20, 16 January 2015 (UTC)