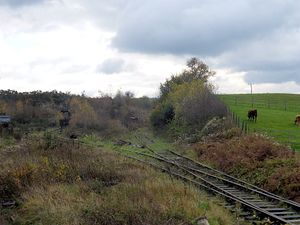 Description of the Stourport branch

From Hartlebury Station (131 miles 68 chainsAs a unit of measurement, 22 yards or 1/80th of a mile), the Severn Valley Branch began around 600 yards to the north at Hartlebury Junction (132m 15ch). From there the line curved to the west towards Stourport. After around 840 yards the line passed over the main Kidderminster to Worcester road, now the A449. The bridge was demolished in 1985 although the sandstone abutments are still in situ. The view below is looking north with Stourport to the left.

Beyond Milepost 133 the line was crossed by two overbridges. Charlton Lane, a minor road between the nearby villages of Torton and Charlton, crossed the Branch via the first (133m 13ch). The second (133m 28ch) appears from early OS maps to have been associated with a smaller track and may have been an accommodation bridge. The maps also show the presence of a foot crossing next to a building between the two bridges.

Leapgate Private Sidings (135m 53ch) were opened on 28 August 1939 to serve a depot of the Regent Oil Company (named Texaco after 1967). The line then entered a cutting at Wilden, a third of a mile long and 60ft deep. It would have been simpler to build a tunnel of that length and depth, but this would not have created sufficient spoil to build the large embankment required in the Stour valley beyond. The cutting was created by the unusual method of driving a tunnel with shafts through the hard sandstone, installing rails, dropping the softer upper material down the shafts into wagons to avoid lifting it, and finally blasting the hard rock underneath to compete the cutting. The west end of the cutting was the site of a siding serving a sand quarry and later used to store coal wagons waiting to enter Stourport Power Station. Wilden Top Road passed over the cutting via a brick overbridge of 54 ft span. The view below is looking west towards Stourport; the sand quarry was on the right beyond the bridge. A photograph from the Courney Haydon Collection shows a view also looking west, with the Leapgate Private Siding points visible in the foreground. The OS map extract shows Wilden Top Road (centre) with Leapgate Private Sidings south of the line (right) and the Sand Quarry siding to the north of it (left). Wilden Lane is on the extreme left.

Approaching Stourport the line crossed Wilden Lane via an overbridge with a skew segmental arch 24ft span on the square (134m 3ch). The view is looking north, with Stourport and the river Stour to the left.

The embankment created from the spoil at Wilden cutting led onto the viaduct which crossed the River Stour (134m 7ch). This was built of sandstone blocks with brick arches, the main arch being of 42ft span on the square and 51ft on the skew. There were also four smaller arches of 24ft span, one east of the river and three west of it.

The embankment continued for around 500 yards to reach another brick viaduct of three 24ft 6in span arches crossing Timber Lane (134m 19ch).

Immediately before 'Mitton Railway Bridge', the bridge over the Staffordshire & Worcestershire Canal (134m 34ch) at the entrance to Stourport Station, a west facing junction was joined by the short branch which was constructed in 1940 and which led to Stourport Power Station, successively crossing Mill Road, the river Stour, Hartlebury Road and Worcester Road via four plate girder bridges. The view below is of the south side of the bridge with Stourport to the left; the canal basin which connected to the railway is on the left beyond the bridge.

Stourport Station was located 3 miles from Hartlebury, 2½ miles from Bewdley and 37¾ miles from Shrewsbury. It was considered one of the principal stations on the line, with two platforms and a passing loop from opening in 1862 as well as a small goods yard and goods shed.

At the west end of Stourport station, Minster Road (now the A451) was crossed via a gated level crossing. The road was part of the route of the Kidderminster and Stourport Electric Tramway and during the tramway's construction in the late 1890s, the GWRGreat Western Railway took the opportunity to extend the passing loop beyond the level crossing. Access to the east end of the Burlish Branch was immediately next to the crossing. Another siding a short distance away was built during the Second World War for National Cold Stores.

In 1929 the GWRGreat Western Railway opened an intermediate halt on the branch between Bewdley and Stourport at Burlish, just on the Stourport side of Mount Pleasant Tunnel.

After passing through Mount Pleasant Tunnel, there are two underbridges on the branch before Bewdley South Junction is reached. Both are included in the Wyre Forest District Council Local Heritage List. The first (item SVR022*) is a large stone and brick arched bridge with a 30 ft span and 28 ft high, lying on the publicly accessible track from the Bewdley Bypass to the farm near Safari Park curve and also to the Devil's Spittleful (Rifle Range) Bridge leading to the Devil's Spittleful & Rifle Range heathland. The second (item SVR023*) is an Occupation Underbridge connecting fields on each side of the line.

BRBritish Rail or British Railways ended passenger services over the Stourport Branch with effect from 6 January 1970. Coal trains from the south to the Power Station continued until March 1979 when road haulage took over completely.[1][2] The line itself was finally taken out of use on 12 January 1981.[3]

No obvious traces of the Power Station or its branch line remain, all four bridges having since been demolished and the embankments levelled for the development of housing estates. The area between the canal bridge at Stourport as far as the former Burlish Crossing, including the site of the former Stourport Station, is now also completely occupied by housing.

The SVRSevern Valley Railway owns the track bed of the Stourport Branch from Bewdley through Mount Pleasant Tunnel to a point 302 yards beyond its southern portal, a short way north of Burlish Halt. It was acquired by the SVRSevern Valley Railway when the southern extension from Alveley Sidings to Foley Park was purchased in December 1972. The trackbed running past houses was immediately sold off as garden extensions, thus offsetting part of the purchase price (the SVRSevern Valley Railway had in effect acted as agents for the local residents' association). The purchase included the modern footbridge and the Halt at Burlish, the platform of which was made from precast concrete sections. Both footbridge and platform were dismantled and stored at Arley for many years before being sold.[4]

The 1973 Light Railway Order allowed the SVRSevern Valley Railway to operate over this section, although it has never been used for public services. The first ¾ mile was re-laid in 1975 for filming of The Seven-Per-Cent Solution to take place. Part of this short length of track is now used as a siding.

In December 2010 an attempt to build a two-road shed for the storage of up to 50 wagons on the course of the trackbed of the branch failed when the HLFHeritage Lottery Fund (National Lottery Heritage Fund from 2019) turned down an application for funding.[5]