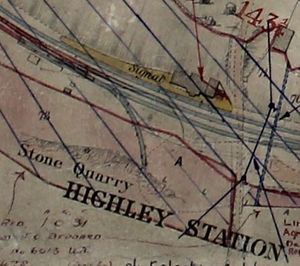 In 1880 the GWRGreat Western Railway provided a siding at Highley for a stone quarry opposite the station worked by Mr Baker of Kidderminster, who agreed to pay the £53 construction cost and a rent of £5 per year for wayleave. Following Mr Baker’s death in or around 1881, the siding became disused.[1]

In August 1882 the GWRGreat Western Railway Board approved the provision of additional sidings and a signal box at Highley which were commissioned on 25 June 1883.[1] Mr Baker’s siding ran within a few yards of the signal box and was presumably removed as part of those works, as the 1884 OSOrdnance Survey Map does not show the quarry siding.