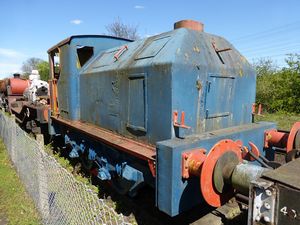 Sentinel 9387 was present on the SVRSevern Valley Railway from 2015-2016 for cosmetic restoration work.

Whatley Quarry[note 1] in Frome, Somerset was operated by Frome Rural District Council until around 1930. A number of companies in the area subsequently combined to form Roads Reconstruction (1934) Ltd. After WWII the quarry rail system was upgraded to standard gauge, with trains of up to seven Hudson side-tipping wagons hauled by Sentinel locos including 9387 which was number 3.[1]

After being retired from industrial use the locomotive was displayed at Welshmill Adventure Playground in Frome at some time prior to March 1976, in yellow livery with 'ARC' lettering.[note 2] The last owner was the Hanson Group, and from August 1998 until early 2015 No. 9387 was on static display outside their Tytherington Quarry in Gloucestershire, with cosmetic overhaul at the West Somerset Railway in 2000/2001[2].

9387 arrived on the SVRSevern Valley Railway in March 2015 for cosmetic restoration work to be carried out, and was photographed at Bridgnorth Loco Works. This involved stripping of paint, metalwork repairs and painting. Heritage Painting finished the paintwork and lining, the restoration being completed by the end of February 2016 when the locomotive left for its new home at the Sandford Station Railway Heritage Centre in Somerset. It now carries green livery and is named 'Marjorie'. 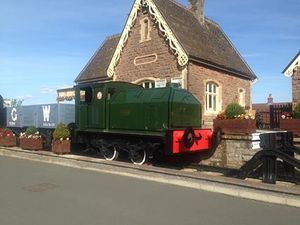 Steam and diesel locomotives visiting the SVR for contract overhauls