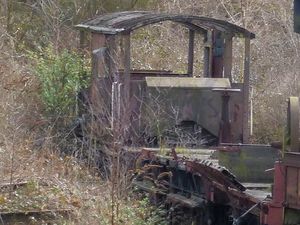 The majority of goods brake vans were of the 20 ton type. However 56291 is an example of a Southern Region 25 ton brake van, equipped with vacuum brakes and fitted with redundant carriage bogies to allow running at up to 75 mph on fast mail and parcel trains. These type of brake vans were often used on boat trains from Southampton, earning them the nickname “Queen Mary”. [1]

56291 arrived on the SVRSevern Valley Railway on 27 November 1993 from London’s Old Oak Common. It is privately owned by J.J. Smith and is stored at the Stourport Triangle awaiting restoration.