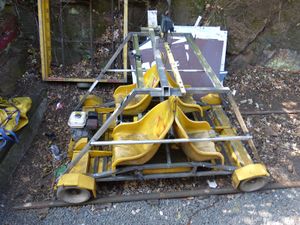 Lesmac Swift Trolley 901007 (Aug 2020)
The Lesmac Swift rapid response trolley and trailer serves a similar function to the Wickham Trolley, being capable of transporting up to four personnel plus equipment to the work site[1].

Trolley 901007 was built by Lesmac in 2006 as LMS017.[2] The trolley carries an identification tag "fastline FL027286" visible between two of the seats, which suggests the former owner was Fastline, a company which ceased trading when parent company Jarvis plc entered administration and subsequently ceased trading in late March 2010.[3]

During the major refurbishment of Bewdley Tunnel over the winter of 2011-12, Wickham Trolley 9021 normally used by the Bewdley PWPermanent Way gang to access work sites was undergoing a major overhaul. The tunnel contractors, Walsh Construction, provided the Lesmac and its trailer on extended loan.[4] The photograph in August 2020 shows the trolley at its regular storage location alongside the DownIn reference to the direction of travel means away from the major terminus (i.e. towards Bridgnorth on the present day SVR) line at Bewdley.