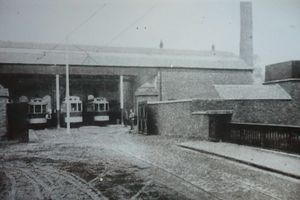 The Kidderminster and Stourport Electric Tramway ran between the two named towns as an isolated subsidiary of the Birmingham and Midland Tramways, which was itself owned by the British Electric Traction Company Ltd. Operating between 1898 and 1929, it competed with the GWRGreat Western Railway for local passenger traffic.

Construction work began in 1897 and was undertaken by the local company George Law of Comberton Hill,[1] who also built the Bridgnorth Cliff Railway and many years later would build The Engine House for the SVRSevern Valley Railway. The tramway was built to a gauge of 3'6" and subject to a speed limit of 5mph in town and 12mph in open country.[2] Unusually for a tramway, the majority of the main line outside the urban areas was on sleeper track at the side of the road,[3] running on its own right of way with a macadam surface. This rural part of the system was referred to as a "tramroad" as opposed to the "tramways" of the urban road sections.[4]

Services were advertised to begin on Monday 23 May 1898, although a last minute decision that more test running was required meant that passengers were not carried until Wednesday 25 May 1898.[5] The fare from Comberton Hill, near Kidderminster Station the Stourport river bridge was 3d.[6] Services were initially provided by six single-deck power cars, with a carrying capacity of 24 passengers, and three trailer cars with a capacity of 40 passengers.[7] The first six power cars were Brush-built and were an unusual design, being fully enclosed and the first tramcars with windscreens to operate in Britain. The open-sided trailer cars proved unsuitable and were converted to independent power cars around September 1899. Later various other new and second-hand rolling stock was used, with several of the power cars being converted to double-deck.[8]

Intersections between the Tramway and the Severn Valley Branch

The tramway crossed the Severn Valley Branch at two locations; via the level crossing at Stourport and via the Stourport Road Bridge at Foley Park. The tramway also ran up Comberton Hill, passing the present day entrance to the SVRSevern Valley Railway and crossing the GWRGreat Western Railway's Kidderminster to Stourbridge line via the road bridge next to the main line station.

During the construction of the tramway, the GWRGreat Western Railway required a number of conditions to be met, in particular to ensure that stray currents from the tramway did not cause a safety hazard by interfering with the low-voltage signalling equipment used on the railway. The railway's rails at the entrance to Stourport station had to be cut to allow the tram rails to pass through them, and the GWRGreat Western Railway insisted that the Tramway Company install and pay for the level crossing.[1]

Competition with the GWRGreat Western Railway

From its opening in 1898, the tram service competed for the GWRGreat Western Railway's passenger traffic, especially as it provided a direct connection between Kidderminster and Stourport while the journey by rail required a change at Bewdley or Hartlebury. By 1901 authorisation had been given to extend the tramway from Kidderminster to Bewdley (see below) which would have further increased this competition These were among the factors that led the GWRGreat Western Railway to introduce a steam railmotor service in January 1905 in a bid to improve local services. The GWRGreat Western Railway opened Foley Park Halt, next to the Stourport Road Bridge, at the same time the railmotor service began.[9] An advertising booklet published by the Tramway Company the following year proclaimed "Easter, 1906. 20,000 passengers travelled by Tram to Stourport"[10].

In December 1899 proposals were first made for an extension of the tramway from Kidderminster to Bewdley.[11] On 26 May 1900 the Tramway Company made an application under the Light Railways Act to bring this about.[12] On 8 October 1901 the Board of Trade authorised its construction under the Kidderminster and Bewdley Light Railways Order 1901, although a section of track through the Bull Ring at Kidderminster was only to be used for empty tramcar movements in the early morning and late evening and prohibited to trams at other times.[13] Having received authorisation, the Company then made no attempt to begin the work despite pressure from the Town Councils, and the proposal was eventually abandoned in March 1905,[14] just 2 months after the GWRGreat Western Railway introduced the rail motor service.

Traffic levels peaked in 1908,[15] after which a slow decline took place up the the First World War. The decline continued after the War, and the last tram ran on the short Comberton Hill route on 31 December 1923, after which time they were replaced by buses. Services to Stourport continued, but by 1928 the tramway Company was seeking permission from the Ministry of Transport to close the tramway altogether, as competition from buses meant they could not raise the necessary capital to maintain and upgrade the route. While MoT permission was still awaited, services ended unannounced on 2 April 1929 with a 'temporary' bus replacement service being instituted. The closure became official later that month[16].

The Tramway appeared in a number of postcards, two examples of which are shown below.

The first postcard shows Tramcar No 8 approaching Stourport. The houses on the left can still be seen opposite the present-day location of the Wharf Care Home on the A451 Minster Road.

The second postcard shows Tramcar No 9 in Oxford Street, Kidderminster. The Kidderminster terminus is a short distance behind the photographer, who was standing on the Bridge Street junction where the main route to Stourport branched to the right, while the tram is on the short branch leading to Worcester Cross, Comberton Hill and Somerleyton Road.

Both No 8 and No 9 were delivered as unpowered trailer cars for the opening in 1898 but converted into powered tramcars the following year.