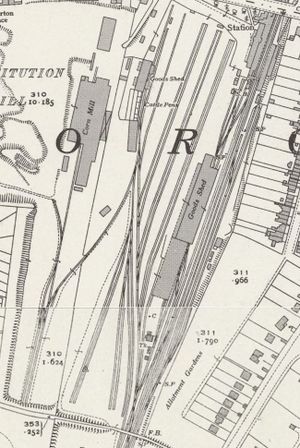 Map showing the location of the corn mill and private sidings 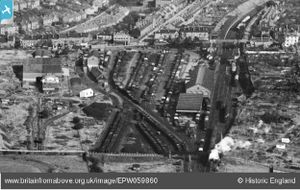 Aerial view of Kidderminster Station and Yard showing J.P.Harvey's corn mill and the fence separating it from the main goods yard.

The 1938 map shows the corn mill and the fence separating it from the goods yard, and its position in relation to the GWRGreat Western Railway goods sheds, which now serve as Kidderminster Railway Museum and the Carriage Repair Works. The layout of the private sidings can also be seen.[note 1]

Just before the corn mill, a small siding turns towards what appears to be a sand or gravel pit. This may be J.H. Smith's siding which was listed in the RCHRailway Clearing House 1938 Handbook of Stations as having a business at Kidderminster accessed via J.P. Harvey's siding.

In 1943 two additional sidings were added in the area marked "310 1.624". One was a third siding for Harveys adjacent to the two shown on the map, and the other next to it was the Summerfield Siding.

The company employed a shunting horse which was used to move wagons around the private siding.[1]

Taken together they suggest Station Mill(s) was a form of the address at the station, and continuing operation of the mill on the site for a long period as part of a wider and long established business in several locations in Kidderminster and elsewhere.