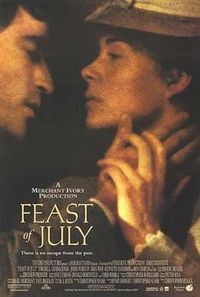 Film poster for Feast of July

Feast of July was a 1995 film adaptation of the novel “The Feast of July” by H.E. Bates, directed by Christopher Menaul, presented by Touchstone Pictures and produced by Merchant Ivory Productions in association with Peregrine Productions. It starred Embeth Davidtz as Bella Ford, with Tom Bell and Gemma Jones as Mr and Mrs WainwrightHarry Smith Wainwright, Locomotive, Carriage and Wagon Superintendent of the South Eastern and Chatham Railway 1899-1913, and James Purefoy, Ben Chaplin, and Kenneth Anderson as their sons as Jedd, Con and Matty.[1]

The novel is set in late 19th Century England. Bella Ford, abandoned by her lover Arch and having suffered a miscarriage, arrives at Addisford where she is taken in by a rural couple with three sons who vie for her affections. She eventually accepts a proposal of marriage from Con, only for her former lover to reappear with tragic consequences.

The film includes a number of scenes shot on the SVRSevern Valley Railway using a short train consisting of 5764 and two vintage carriages.[2] The two carriages used in filming were provided by the Vintage Carriages Trust.[3] They are:

In the first scene the train is seen in a distant shot across the River Severn before arriving at Addisford (Bewdley) where Jedd, a soldier, disembarks and is met by his parents and Bella.

In the next scene, filmed at night, Bella has decided to leave the family and is waiting at Addisford (Bewdley's platform 2). Learning of this, Con rushes to the station, through the booking hall and across the footbridge to join her. The train arrives but he persuades to stay and it leaves without her.

The third scene takes place after Arch has returned and been killed by Con in a fit of rage. Con and Bella decide to flee Addisford. The train is briefly seen arriving at Addisford before leaving with Bella and Con aboard.

Con eventually decides to turn himself in as he cannot live with the guilt. The final scene takes place on the morning of his execution as Bella leaves Addisford for the last time. She waits on platform 2 for the train to arrive, noting that the platform clock is showing four minutes to eight. The train arrives, she boards it and it sets off. She sees her watch pass eight o’clock as his execution takes place, and the train is then seen for the last time as it enters Bewdley Tunnel’s western portal.

Other scenes were also filmed in the locality, one of which takes place on the banks of the River Severn near Linley, with the chainAs a unit of measurement, 22 yards or 1/80th of a mile bridge visible in the background. Much use was also made of the streets and buildings of Blists Hill Victorian Town at Ironbridge.