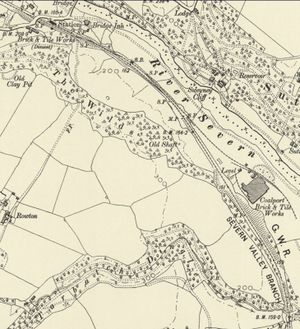 The Coalport Brick & Tile Works was situated south of Coalport Station. The works and its siding can be seen on the right in the extract from the Ordnance Survey map published in 1903. Coalport station is towards the upper left. Entry to the siding was controlled by Coalport signal box (marked 'S.B.' on the map extract) which also controlled access to the adjacent Coalport passing loop.

History of the Works

Three years later in 1894 the Works, also known as "Coalport Tileries" began tile production.[1] In the same year, GWRGreat Western Railway General Manager Henry Lambert proposed that Coalport should become a crossing station with a passing loop and additional sidings to serve Exley's works. These improvements, including the signal box, were approved by the Board of Trade on 22 January 1896.[2] In 1906 a branch of the siding was added to the west of the Works (shown as a disconnected line on the 1903 map).

During both World Wars, the Works was requisitioned for munitions purposes. Coalport Refractories continued to use the private siding until 1956[3]. The Works had closed by 1963[4] and by 1981 the historic buildings had been demolished and replaced by a Sewage Reclamation Works[5].

The works and siding stand above a deep cutting through which the Severn Valley Branch ran. In 1861 a navvy suffered an accident while working in the cutting. The contemporary newspaper report identified the location as "Tarbet's Dingle", an archaic spelling of Tarbatch Dingle which can be seen at the south end of the cutting on the OS map.